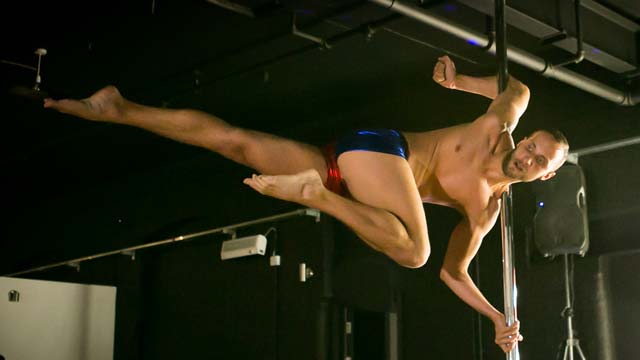 Sometimes you get to interview people who are blasé about what they are doing, maybe even take it for granted and can’t really be bothered to be interviewed. But other times you get to speak to someone so enthusiastic about their chosen craft and determined to reach the top that it’s infectious.

Damien Kutryb most definitely falls into the second category. In three short years he has burst onto the pole dancing fitness scene and is quickly making a name for himself with awards a plenty.

Canal St’s Chris Park spoke to him from his Manchester Studio, GFFdamian Dance Studio to talk sashes, dogs and his plans for world domination.

1. What made you take up pole dancing?
I wanted to do pole dancing from being a child. My parents took me to the circus in Germany when I was eight or ten and I saw all the acrobats on poles.

It was not possible to do it in Poland because of my age and being a man and people connecting it with striptease in nightclubs. I moved to Manchester when I was 20 and after two years my colleague asked me if I wanted to go to a pole dancing class. That was four years ago and I said that was the thing I wanted to.

Before that I was working in a casino and other hospitality jobs but in 2014 I opened my studio and that is what I do now, teaching people and travelling the world. It was a big change in my life. I had to train for three years before this.

2.  How often do you spend on the pole per day?
I concentrate on teaching more now that train but when I started I was spending five or six hours a day. Now it is more one or two hours per week. If I am training for a competition I will train for three or four hours a day.  Even when I am teaching I am constantly jumping on the pole to show people what to do, sometimes I have to repeat it a thousand times.

3. You’ve had quite the year for winning awards this year.
I recently had a knee operation and am just back into life, I couldn’t do pole for a couple of months. Last month I came first, I am the current JLN Pole Championship and second place in Mr Pole Fitness and also won the Entertainer awards for both of those.

I want to work for the Polish gay community in Manchester, there are a lot of gay Polish people in Manchester. They are still very quiet because they are used to it and they need to be more open, this is why I went in for the Mr Gay Poland competition. So people get to know me.

4. Have you ever received backlash from a predominantly female area of competing?
No everyone has been very welcoming. Me and my partner both teach at our studio which is short for Gay Friendly Fitness, then we employed another gay guy and then a gay female. It is the perfect place to come and feel safe.

5. How is Staska (Damian’s beautiful dog)?
She is our Queen. I used to do extra work and she has already has had roles in Coronation Street and Cucumber.

6. Where would you like to be in five years time?
I will definitely be pole dancing. My dream is to open gay friendly studios in other cities. Me and my partner got engaged in Amsterdam so I’d love to open one there.

I will definitely do other competitions, professional ones, European ones and maybe World ones. I have loads of ideas.

7.  What is the best moment you have had teaching?
When my student went for the European Championships and she got to the finals. That was a good feeling like “my child is there”. I also have two girls who teach for me were my students.

8.  What would you say to anyone who wants to try it but is afraid?
People say to me, “I don’t have the strength”, “I’m too big” or “I’m scared”. I say to them “you don’t have to be great to start but you have to start to be great”.

For more information please visit via the link below.
By Chris Park for Canal St Online