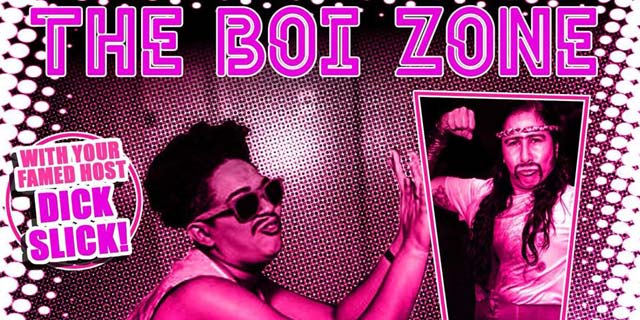 A fabulous Drag King night for Kings and their admirers... first Thursday of every month THE HOME OF THE DRAG KINGS, TriBeCa Manchester.

"The Drag King phenomenon has been growing in Manchester since May 2010, and 2018 is the year we take over the city", says Lydia Bernsmeier-Rullow, long time drag king performing around the country as Dick Slick. "The Boi Zone came out of a need for a safe space for Kings in Manchester and has grown from this little niche night in a downstairs room, just for kings to a huge spectacle of performance for anyone who wants to come along."

Whether you can sing, or even if you can't, The Boi Zone has something for you - Karaoke, Lip Syncing, and if you just want to come and watch, that's fine too!

Dick Slick will perform any song you want to hear (even the ones he's never heard before) in Karaoke Roulette, and with special guests like Manchester Legend Jack the Lad, you're sure to have fun.

So why not don a tache, loosen up, and get your KING on at The Boi Zone!

Free Entry All Night, great drinks deals and food available with tix via the link below.