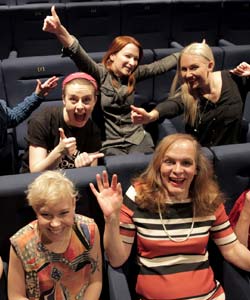 TRANSFORMING CINEMA: YOUR VOTE COULD BRING A TRANSGENDER FILM FESTIVAL TO SHEFFIELD

Social enterprise E.D.E.N Film Productions has been announced as a People’s Project Finalist and, if successful, plans to bring transgender film festival Transforming Cinema to Sheffield.

Transforming Cinema (VIDEO) is competing for the people’s vote to win up to £50,000 of National Lottery funding. If successful in the People’s Project, funded by the Big Lottery Fund and featured on ITV, Transforming Cinema would create a film festival thatchampions trans people, providing a platform and a chance for trans voices to be heard.

The Transforming Cinema project would train members of the lesbian, gay, bisexual and transgender (LGBT) community in filmmaking skills to create films raising awareness of issues affecting the transgender and gender non-conforming community. These films would then be screened at a brand new Transforming Cinema festival, organised by E.D.E.N and held on Transgender Day of Remembrance in Sheffield.

By working with people across the gender spectrum, E.D.E.N would create an event that celebrates transgender lives whilst driving conversations forward, educating and promoting a more open and inclusive society that embraces diversity and welcomes all.

“We are thrilled to be in the running to win this prize and not only provide training put on an event that could have such a positive impact on trans visibility and the way that transgender people are seen in society,” said Claire Watkinson, Managing Director at E.D.E.N Film Productions. She continues: “This past year has seen society become more aware of the needs of transgender and gender nonconforming people. This is good news - but all too often the conversation seems skewed; we see people talking about transgender people rather than listening to transgender people.”

“Depression, self-harm and suicide are some of the issues that affect the trans community to a much higher degree than the rest of the population and there is a lack of understanding in society at large. Action is needed,” says Watkinson.

“If there had been something like a Transforming Cinema event when I was a young person, it would have totally changed my life,” says trans rights activist Nell Stockton. “I didn’t have the vocabulary to deal with what I was feeling, I didn’t even know there was a name for what I was feeling and experiencing.”“If there was something like that it would have meant a great deal, it would have meant I wouldn’t have gone through all these decades pretending to be someone that I wasn’t and all the suffering that went along with that has greatly affected me,” says Stockton, adding:“I think people should vote for Transforming Cinema because with the suicide rates as they are, a vote for us, it may sound melodramatic, but it could save someone’s life.”

To vote for Transforming Cinema head to thepeoplesprojects.org.uk via the link below.

You can also vote by post by sending a postcard to: Freepost THE PEOPLE'S PROJECTS, including name, address and telephone number of the voter and the name of

the project. Please remember you can only vote once per person per region. Voting closes midday Sunday 13 March.