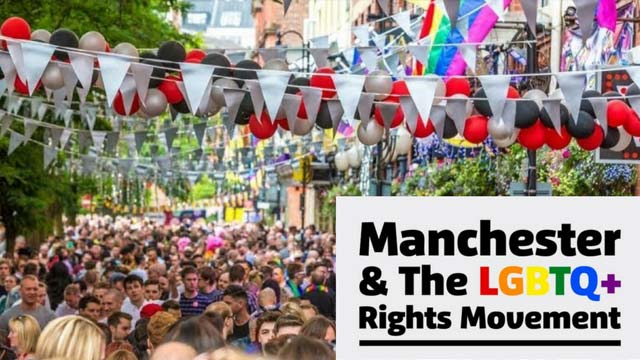 Whether we’re splitting the atom, inventing the computer, helping women to get the vote, or bringing Corrie to the nation’s screens, Manchester always seems to play a part in cultural advances.

The same applies to the city’s role in UK LGBTQ+ history. At theEword, we’ve created our own timeline to highlight the key role that Manchester has played within LGBTQ+ history.

In 1975, the Manchester Gay Alliance formed the Manchester Gay Switchboard that offered support and information to callers. The scheme originally operated in the basement of the  University of Manchester. After receiving a council grant in 1978, the scheme found a new home on Bloom Street.

By 1990, the switchboard teamed up with The Lesbian Link Helpline to for the Manchester Lesbian and Gay Switchboard.

Prior to the first meeting of the Equal Opportunities Committee, some members of the council were openly hostile to minority, female, and gay counselors.

Following the Committee’s formation, an Equality and Fairness strategy was formed to combat such bigotry. The numerous equality posts created included a Gay Men’s Officer and a Lesbian Officer, first occupied by Paul Fairweather and Maggie Turner respectively.

This year marked a milestone in the city’s gay history: the year Manchester Gay Pride was handed a £1,700 grant by the council to put on a two-week celebration, complete with a huge banner adorning Oxford Street.

This would eventually lead to the first Manchester Pride event in 1990.

In December 1986 Manchester City Council approved funding of £118,000 for what was to become Europe’s first purpose-built Gay Centre. The centre, on Sidney Street, is still serving the community today.

1988 - Section 28, preventing the ‘promotion’ of homosexuality by local authorities, comes into force

Did Manchester take this horrendous piece of legislation lying down? Not a chance.

A huge anti-Section 28 protest was held in which over 20,000 took to the Mancunian streets to let their disquiet be heard.

As a result, the Council produced over 6000 leaflets that set out how they aimed to prevent LGBT staff and service users from receiving unequal treatment.

This year saw Queer as Folk burst onto British television screens fearlessly depicting LGBT life by putting a spotlight on the bright lights of Canal Street.

The programme remains one of the world’s best-loved gay TV shows and of course, Manchester just had to be involved.

The formation of this group was seen as a massive show of commitment by the Council to promote lesbian, gay, bisexual and transgender rights in its work and to offer effective staff support.

This was a fantastic coup for not just the Council but also the city. Being named in the list highlighted Manchester’s commitment to leading the way when it comes to promoting LGBT rights – a move that was shown across the world as a step in the right direction towards equality.

A crowning triumph that shows just how far the people of Manchester have moved away from the dark ages of the past and to a point where an openly gay man can rightfully be judged on his talents and not by his sexuality.

For more defining moments in Manchester’s LGBTQ+ history, take a look at theEword’s Timeline and their latest video on what it means to be gay in the UK Workplace.