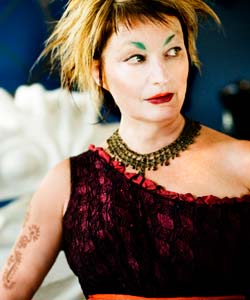 Legendary Canadian Singer-Songwriter Jane Siberry is in the UK at present as part of her most recent tour and we caught up with her for a chat.

Siberry's music is most commonly compared to artists such as Kate Bush, Joni Mitchell and Laurie Anderson. Her music has drawn from a wide variety of styles, ranging from new wave rock on her earlier albums to a reflective pop style influenced by jazz, folk, gospel, classical and liturgical music in her later work.

She has cited Van Morrison and Miles Davis as being strong creative influences.

Jane Stewart was born in Toronto, Canada, in 1955 and was raised in the suburb of Etobicoke. She would take her subsequent surname, "Siberry", from the family name of her maternal aunt and uncle. Many years later, she would explain this choice by stating "this woman and her husband were the first couple I met where I could feel the love between them and I held that in front of me as a reference point".This view is further held on the matter of equal rights and same sex unions,where she firmly believes that regardless of which 'title' is given to such ceremony's,every couple should have the right to gather with friends and family and commit to each other.

With a forthcoming 'Salon' event in Manchester this weekend,which she performed at some 3 years ago,followed by a larger,but still intimate gig at the wonderful Bury Met next week,Jane told us that "the show will have a familiar theme running through it,which my audiences seem to like.It will contain several of my better know songs,but will also feature new work that will be less familiar".

These performances are an extension of a North American Tour and follow recent dates in London and elsewhere in the UK.

Jane went onto say "that she was enjoying this round of dates and felt that she could judge what her fans would also enjoy".

Reactions elsewhere, certainly seem to bear that out.

Her most loyal fans,ourselves included,will be most aware of the haunting 'The Valley'(famously sung by KD Lang),'Love is Everything'and the emotionally charged 'Calling All Angels'made most famous as the final balled in the 1992 film 'Pay It Forward'.
Although the Salon event is sold Out,there are still tickets available for the Bury Met gig.

We certainly cant wait and will review on the night.

Jane also has a new recording 'Consider The Lily'due out soon.