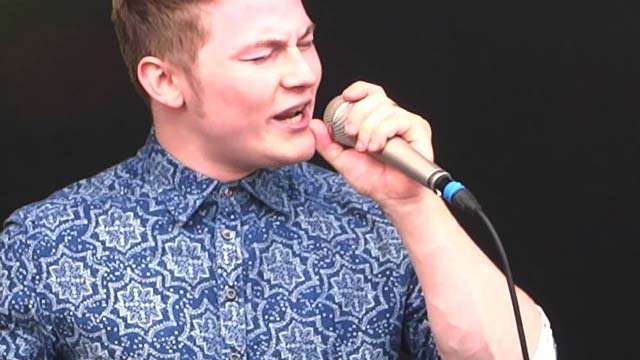 STRIKE UP THE BAND !

Earlier this year, BBC1 launched “Let It Shine”, a nationwide search for five singers to form a group for new theatre show “The Band”, based around the music of Take That.

Does being a songwriter by trade make you the Barlow of “The Band”?

I suppose so. Perhaps I'm the father figure and I've certainly got the minimal dancing skills!

Did you have to develop a fitness regime ahead of rehearsals?

Very much so. The rehearsal schedule has been pretty intense so I've been working hard for the past two and a half months dieting, exercising and running every day to get into shape. I've definitely seen a big improvement in my fitness and I've got a lot more stamina to help me cope with learning all the routines and stuff. It's been a great incentive knowing we have a deadline with the show starting on 8th September - which also happens to be my birthday!

Did you see “Let It Shine” as a calculated gamble? It's a big audience to witness you potentially failing an audition?

Everyone has that worry with reality TV talent shows but the way the music industry operates now it's become the norm and it's not as frowned upon as it used to be. Even if you don't win, it's still a starting point and a chance to get on the map which is crucial because the market for singers and actors is more saturated now than it's ever been. It's been a great head start for me personally and obviously the involvement of Gary was a big deal because I've always respected and looked up to him.

Was it tough to watch the others fall by the wayside every week or were you internally yelling 'YES, I'M STILL IN !' ?

It was hard at certain stages, particularly when there were eight of us performing as an ensemble with Olly Murs. We'd all become really good friends but were all aware that three of us were going to be knocked out. You just had to see it from the perspective of trying to get to the next stage and stay positive about it all.

You've been open about your sexuality from the start. Do you think it's the big deal it once was or are we all becoming less interested now?

On some levels it's still an issue - not for me, my family or a growing percentage of the country now - but you have to be respectful and mindful of the fact that not everyone lives here where we have protection under the law. I think it's very important over the next ten or twenty years that people continue to push the boundaries of what is acceptable. When I was a young boy there were hardly any gay characters in soaps and now there's gay couples copping off all over the schedules! Every soap has gay storylines and Marvel will soon be coming up with a gay superhero so things are becoming more normalised. There is still a lot to be done though. From the start of “Let It Shine” I just wanted to be normal and honest really.

The five of you didn't even know each other six months ago and have since been spending almost all your time together. It would be only natural to have a few clashes so how has the band been jelling?

We're very strong together. During the TV series we were also living together, then we went straight into heavy duty rehearsals together for the stage show so we've had to become very tight knit. We know each others quirks but we also know when to leave each other alone.

So has the show given you a taste for theatre or is music still the main goal?

The show has been a real eye opener for me because I'm not from that background. It's been really entertaining and fascinating to see everyone at work and witness everything behind the scenes so I definitely wouldn't rule out doing more musical theatre in the long run.

Do you think expectations of the show are almost too high after all of the TV promotion plus the huge love the UK has for Take That?

Interest around the TV show has definitely build those expectations up but I think we're in a very good position. Theatre audiences are going to get something they're not expecting because this show isn't a jukebox musical. I hope it's going to turn heads because it's a very special hybrid that's not been done before. From all of the other musicals I've seen, I don't think there's been a show like “The Band” before. It's very easy to assume, because we're doing Take That songs, that the show's going to be a certain thing and that it's going to be a bit cheesy but at its heart there's a very real, layered story. I'm very excited about it and I can't wait for people to see it.

Have you thought about life after the musical? Where would you like your career to go next?

The great thing about my job is that I can do a show like this alongside my songwriting. The Five To Five boys have also just signed a management deal so after the show is over we're going to have a good crack at boyband market but with original material. For me personally though, I'll always want to go back to writing full time and this show has given me a fantastic opportunity to put my name out there and build my industry CV.

I hear that you're a sci-fi fanatic, particularly when it comes to a certain timelord. Are you excited about having a female Dr Who?

Absolutely. I just don't understand the people who have slated it. If any true fan can't accept that a thousand year old character with two hearts, who travels in time across the universe can also be a woman, they're obviously watching the wrong bloody show!