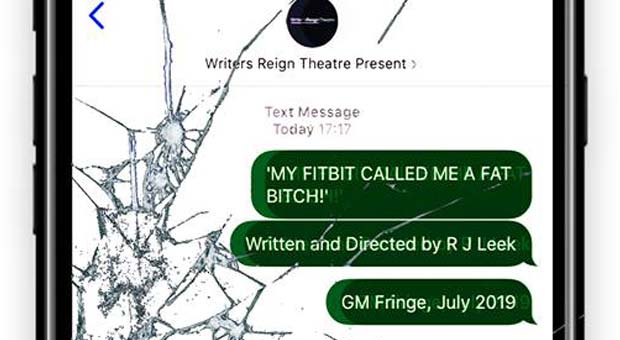 My fitbit called a fat bitch

Spending what was billed as the hottest night since records began in the upstairs main theatre at the Kings Arms in Salford, might not be to everyone’s taste. But for those who braved the heat, we were treated to a very good hour.

The main theme of My FitBit Called me a Fat Bitch, is who has the upper hand in our relationship with technology, and, as might be expected, it’s not we mere mortals. However we engage with “The Cloud” via social media, Google, Microsoft or any number of apps, we are all having our online personas mined. That much we know, but once the data exists (either via some inappropriate posts to social media, some indiscreet photographs, or an email written under the influence) it’s there for eternity. Skeletons in the closet hardly describes it.

Before the performance began I noticed the name Pegeen Murphy as director on the brief synopsis, but it took me a while to remember why that rang a bell. Trawling through the various reviews I found that she was a finalist in the Manchester Monologues, which were aired on radio at the end of last year. That set the stage for me, so to speak.

The play (although that’s not a good description of what we attended) has four actors. We start with Cloud Man (Ronnie Leek) who doubles up as the narrator. Sadie (Kasie Christian) is the one wearing the FitBit. Dom (John O’Neil) pops up in various guises as events unfold, and last, but by no means least, we have the Janitor (Barney Harwood) who more than supports the other three, and plays the keyboard too.

We start out fairly light-heartedly, and most of the audience recognized the events. We ask Siri, Alexa, or any other online assistant to do our bidding, little realizing that we’re being monitored and recorded constantly. These assistants are listening all the time (how else could they respond to “OK Google” if they weren’t?), but only respond when we choose to engage with them. At one stage the navigational assistant tries (almost successfully) to strike up a relationship with Sadie. We laughed, but the reality is chilling. We also witnessed the vagaries of online dating, and the purchasing of inflatable partners. Enough said.

There are some very funny moments, but about 10 minutes from the end, the darker side of the internet appears. A young girl who is being exploited by a paedophile stopped us laughing immediately. We ended more or less on a happy note though, and the huge applause was more than justified.

My FitBit Called me a Fat Bitch continues at the Kings Arms until July 30th.