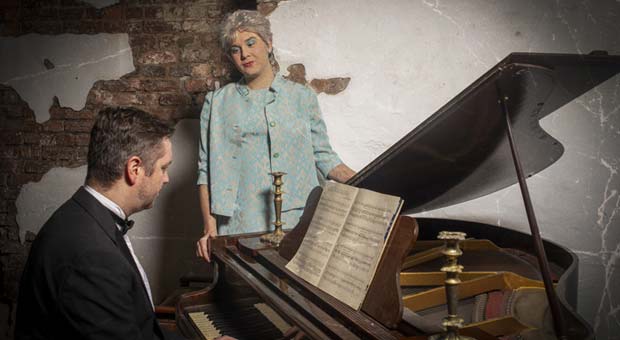 Barbara, a new commission for Turn on Fest at Hope Mill Theatre

Barbara, a new commission for Turn on Fest at Hope Mill Theatre, was performed on 1st February in the Engine Room bar there for one night only. It stars Barbara and Bernard (pronounced Bernaard) in their drawing room for an evening of Candlelight, Crumpets and Crooning, with Bernard (Tom Guest) seated at the baby grand, and Barbara (Mark Croasdale) elegantly turned out in a fetching twinset and heels. It was stressed that this is very much a work in progress. In the event, progress has been very rapid indeed as the performance ended with the audience on their feet.

It’s an evening that relates a very personal memoir in which Mark’s grandmother slowly succumbs to dementia. In the performance Mark and Tom recreate one of Barbara’s candlelit suppers for invited guests. I was expecting a Hinge and Bracket kind of evening, but we were given something much more original where we experienced genuine laughter and bittersweet humour, together with moments of tender sadness as forgetfulness takes over, and Barbara is slowly lost to us. Buttered crumpets were provided before the performance – no jam, and warmed under a grill not in a toaster – to stave off any hunger pangs. The evening was punctuated with periods where Mark addressed the audience directly before going back into character.

We started with Bernard at the piano introducing Barbara, and we were soon singing along to a new song – catchily called “It’s Barbara” – before she made her entrance and delivered some rules of etiquette that could have come straight from Miss Manner’s Guide to Excruciatingly Correct Behaviour (long since out of print).

Next we had a family favourite, My Curly Headed Baby, brought up to date by omitting several of the somewhat non-PC elements and verses but still sung in the style of Paul Robeson, with the audience singing along in the chorus. More advice followed which gave us some ideas of how to break the ice at parties, plus some pointers on how to behave afterwards: you have two ears but just one mouth so listen twice as much as you speak.

We then witnessed Barbara’s terpsichorean capabilities with her strutting her stuff, complete with hat and cane, to Food Glorious Food. It was here Barbara’s memory started to fail her, but with prompts from Bernard she recovered.

Next off we had audience participation at its best. The song Lollipop requires a vocal “pop” normally produced by placing the index finger inside one’s cheek and gently stretching and releasing the latter. It must be a genetic thing, like being able to curl your tongue, as the chap chosen to perform this simply couldn’t do it. Instead, even trying with left and right fingers, his spittle simply landed on adjacent guests. As a fallback he was instructed to shout the word “pop” at appropriate moments. You couldn’t have made it up, and it was certainly a departure from the script, and well recovered.

At this point the strain of caring for a loved one who is suffering came out. Tom, who hitherto had been amazing, suddenly snapped when Barbara kept trying to do the same number. Crumpets came to the rescue as a familiar item that she could relate to. She later goes missing, but returns eventually, and is found picking out a number, “Souvenirs”, on the piano which Bernard then takes up:

There's nothing left for me

Of days that used to be

I live in memory, among my souvenirs

Some letters tied in blue

A photograph or two

I find a rose for you

Down in my treasure chest

And though they do their best

To give me consolation

I count them all apart

And as the teardrops start

I find a broken heart

I live in memories

It would have been a very sad way to end the evening, so we had a final number – “Do, Re Mi” to round things off, followed by a joint curtain speech from Mark and Tom explaining how music can help reconnect dementia sufferers to the world, and they hope to develop “Barbara” further to deliver this message. The evening was all the more poignant as Barbara gave her piano to Hope Mill and it was used in the performance. The song sheet for Souvenirs was found in the piano stool enhanced with her notes on its performance.

Full marks to Mark and Tom for lifting the lid on the Pandora’s box that is dementia, where just when everything seems to be lost, one thing remains: Hope.