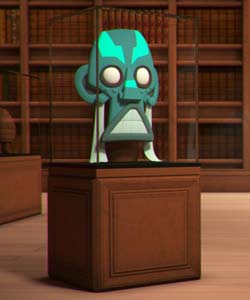 I wasn’t quite sure what to expect when I strode into Z-Arts for Haphazard, the latest event hosted by one of Manchester’s most creative venues. Luckily, a member of staff was on the door to explain it to me.

“Haphazard’s a collection of performances.” she said. “We’ve got lots of artists of various disciplines all plying their trade for a family audience, from model-makers to conceptual artists to live interactive shows. Some are on at certain times, and some are roaming, but they’re spread out all across the building and many are constantly ongoing, so you’re free to come and go as you please. And that’s it really!”

So with that, I was off.

I began with in the Gallery with Pastures New by Matt Girling. I was one of a large crowd being immediately drawn to Pastures New, and it wasn’t difficult to see why. Described in the programme as “a strange and tiny world”, a complex of hand-made structures lay sprawled across several tables, inhabited by hand-made models of varying sizes and shapes. Matt showed me a creature built from a long tube, a plastic snake toy and what looked to be a couple of pipe cleaners.

“This is the first model that I made when I was bored in work.” he began, then caught someone else’s eye. “Yes…I left that job! I’ve had the vision for it for a while, and that’s where Henry comes in – he’s the professional animator who helps me make it all work.”

He indicated Henry, who was concentrating on moving the two tiny cameras at table level. The cameras took a picture every five seconds, and Matt and Henry uploaded the footage from them every hour or so. The images were strung together in a constantly looping animation behind them giving the impression of life to the little world on the table. It was endlessly fascinating; I watched buildings rise and fall, and stickmen draped in cable-tidies make their shuddering way between the spires and structures. Everything had several components; old toys, bits and pieces, remainders of old packaging. I could see egg-boxes, plastic tubing and toilet roll tubes, and a cannibalised tyrannosaurus rex head was frozen in a roar atop one of the spires. It was a unique idea, and not only characterised by Matt’s ingenuity but also by the children who gave it life.

Not far away stood The Bees: Colony. A treasure trove of whimsy, the huts were the creation of Artizani, with separate scenes playing themselves out in each one. Children and adults peered into the peepholes, laughing, marvelling or jumping back in fright – I did too when I saw the one which featured my own eyes staring back out at me.

“When building them, I only have three rules.” said their creator. “Obviously, it has to fit in the box. Something has to happen, and people have to be able to get it within a few seconds. I don’t want anyone to be bored, or confused.”

Considering they were largely static models, the results were impressive. I did admit to enjoy watching the tiny model bees chatter in a mini-cinema, or buzz around a gently rotating space station. Compared to the other performances, though, for an adult like me it was relatively fleeting entertainment, and I soon moved onto Ludicrously Luminous.

The first thing that struck me about Ludicrously Luminous (by the Travelling Light Circus) was how quiet it was. Tucked away in Z-Arts’ main theatre, rows upon rows of seats had been folded back to make room for a whirling spiral of light, with ribbons of red, green and purple streaming through the long tubes that made up its body. It was wired to three intriguing steampunk contraptions that sat facing it, with children hanging off their levers and eagerly spinning the wheels. I wondered whether they were meant to be.

“Don’t worry, they’re built to withstand punishment.” smiled Chris, the on-site engineer. He was dressed in a Victorian nobleman’s outfit that made him look strangely ethereal next to the vortex of colour behind him. “They were built ahead of a show of ours in Kew Gardens and were going to be outside for days on end, so they had to withstand the elements.” He indicated a small boy hanging from one of the levers. “And the visitors.”

Ludicrously Luminous was one of my favourite performances. Not only because of the entrancing movement of the colours, but also because of that quietness and the vaguely incongruent sense of serenity about it – compared to the loud silliness of many of the other acts. The designs of the machines, too, were pleasingly mechanical and produced satisfying whirring and beeping sounds as they injected fresh colours into the spiral. It was absolutely mesmerising, and it was quite some time before I left, to dive once more into the loud bustle of the gallery.

Next I visited The Free Market with Katy Baird, who was giving away all of her old clothes in return for an ‘exchange of ideas’ with her visitors. She was a friendly woman, with short greenish hair and a denim jacket, sitting next to a rack of dresses and a table of elaborate jewellery. I asked the first question everyone was asking – why was she giving her clothes away?

“Reinventing myself, I guess.” she said with a laugh. She showed me a looping video on an iPad behind her – it showed her in a dress, with long pink hair. “Until two weeks ago I looked like that. But I’ve since decided to reinvent myself to how I look now, which is closer to how I looked when I was sixteen. God –” her eyes suddenly glazed over as she looked at the dresses, “– maybe I’m having a midlife crisis…” She appeared to shrug the idea off. “But now I’m giving my stuff away in exchange for conversation, ideas. I’m doing research for a new show and it’s a way for me to see other points of view, and things I’d never considered before. How would you describe your ‘look’?”

I thought about it. “Composite would be the word I’d use.  Taken from a few subcultures, a few styles.”

She nodded, and noted down my response. It’s odd, she told me, how clothes can control us without us even realising. We still judge people on appearance – whether we like to or not – and by changing our own appearance, we can change our perception of ourselves. As we grow older, the change is reflected in how we dress, and it can either be an accidental expression or conscious control.

Katy interrupted herself to draw my attention to the start of the Clothes Show, which was just beginning in the space next to us. The brainchild of Eilidh Macaskill and Rosana Cade, I already knew it to be one of the grander-scale performances. A crowd had already gathered, and as the lights went down there was a moment of silence before the hosts appeared.

A dinosaur and a figure clad in silver both strutted onto the stage to a thudding soundtrack, and without a word they launched into a catwalk dance-off – a wonderfully absurd spectacle. When they finished, the dinosaur (Macaskill) introduced itself to the audience.

“I am the Gendosaurus Rex,” it began. “And this is the Robot.”

The Robot (Cade) did a little wave, its square head wobbling slightly. Their introduction was representative of the rest of their show; short, concise, and very silly. Now is the time to guiltily admit that I didn’t think they’d be able, but they managed to handle the complex issue of gender identity in a way that children would actually be able to grasp. Their points were simple: boys – if you want to wear pink, go right ahead and wear pink. Girls – if you want to wear Power Rangers T-Shirts, go nuts. Why should clothes control you?

Their simplicity and silliness carried over to their Powerpoint. My favourite was the slide which merely said Ad Break, during which they stood still and did nothing for a few seconds. It was little short of masterful, and they managed to deliver The Clothes Show in a way which spoke directly to their young audience, rather than assuming any intellectual or moral superiority – their sexless costumes and the whimsical, intentionally inconsistent accent of the Gendosaurus Rex helped that no end. The Clothes Show also nicely supported some of the points that Katy had been making, and I decided it was probably no accident that the performances had been placed so closely together.

It was almost time for me to go, but before I did I was determined to see Crazy F.O.R.E, organised and run by Left Leg Gallery. It was a beautifully simple but creative idea – on the floor were several canvases, with golf-ball sized holes carved into each. Each golf ball would be coated in paint, and then sent rolling along the canvas by increasingly enthusiastic children. The painted faces and quirky costumes of the Left Leg Gallery staff added that extra touch of eccentricity, and it was a pleasantly light-hearted end to the afternoon.

On my way back home, I mused upon the day. In some places it was loud and silly, and other places entrancing and mystical. But for me the most surprising was that for a family event, it addressed some surprisingly complex questions – for those old enough to consider them.

For more performances at Z Arts.