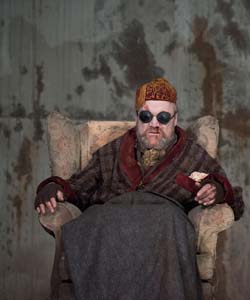 Endgame at Home until 12 March

This new production of Samuel Beckett’s Endgame is the perfect marriage of high culture and popular culture. The play itself is difficult to watch, as nothing much happens, and that is the point. Each day, we carry out tasks we have done previously in a quest to get to the weekend. Before we know it, we are approaching middle age, thinking where has the time gone?

Some may balk at the repetitive nature of the play, as we follow Hamm, the master and his loyal but desperate to escape servant, Clov, This is a tough watch, as it is darkly comic and celebrates silence as well as long stretches of dialogue.

But, there is accessibility here, in the guise of the two lead actors. The popular culture element comes from the most unlikely source; Coronation Street. David Neilson (Roy Cropper) plays the tyrannical master with ease and buries the café dwelling, anything for an easy life character that he plays on the cobbles. He is joined by Chris Gascoyne (formerly, Peter Barlow) and again, he could not be any more different; disabled and a prisoner who talks of leaving, but keeps coming back.

This is perfect casting, as often actors in Soaps must feel trapped by the reliability of the work and a fear that if they leave, Celebrity Big Brother or another reality show beckons, until they are asked back. These two have always been reliably good in Corrie and on stage, they breathe dark humour and a sense of a humanity into the most difficult of pieces.

Endgame is Steptoe and Son meets 1984, as it is incredibly bleak and the banter between the characters resembles that of two relatives who cannot stand one another, yet remain together day after day, as there is dependability and a sense of knowing what you are getting; thus avoiding the unknown and staying put. How many of us have done that in our jobs? So, there is so much that is relatable to the audience, if you look for it.

Dominic Hill utilises the chemistry that these two actors share and elicits fine performances from each of them. These are not soap actors attempting Beckett; they know the text and they live it. This is what actors of their calibre train for and they give superb turns.

Tom Pier’s set design is akin to that of a dungeon, windows that do not open and a severe lack of light, give the characters no hope. There is humour here, but it is incredibly sardonic but these two actors do bring it out of the text.

Peter Kelly and Barbara Rafferty support ably, from the discomfort of two dustbins, but this play is far from rubbish. Be warned, it is not the easiest play to watch and some audience members may find it testing. But you are rewarded; witnessing two local actors, well known to millions of viewers step off the cobbles and show you another side of them, with tremendous skill and passion.

For more about Home

Autumn and Winter programme announced with a strong LGBTQ line up.