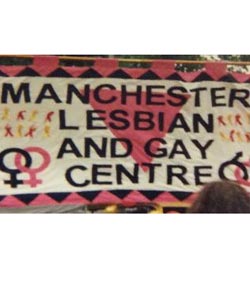 A 26-year-old Manchester community centre could soon be transformed, thanks to a £63,000 grant won by an ambitious local charity.

LGBT Youth North West will use the £63,000 grant to conduct a feasibility study for developments to The Joyce Layland LGBT Centre, a dedicated Manchester space for lesbian, gay, bisexual and transgender (LGBT) community groups.

The long-term plans for the centre could see its capacity extended with two extra floors, allowing the centre to support a far greater number of LGBT people.One of the plans from LGBT Youth North West, which manages the building, is to use the centre to create an LGBT-inclusive school, similar to the famous Harvey Milk school in New York City. LGBT schools are designed for – but not limited to – gay, lesbian, bisexual, and transgender young people, as well as those questioning their sexuality.

LGBT Youth North West also plans to train up its staff on over 80 training courses, ranging from carpentry to food hygiene, to allow the centre to be fully maintained by staff and volunteers and become fully sustainable.

Groups who regularly meet at the centre - which first opened in 1988 - include 'Lesbian and Gay Youth Manchester', a safe space for young people aged 14 to 25; 'Rainbow Noir', a group established for and by queer people of colour in Manchester; and 'Manchester University's LGBTQ society'. The centre is also used by groups who are not exclusively part of the LGBT community, including 'Narcotics Anonymous' and 'Alcoholics Anonymous’.

The £63,000 grant for The Joyce Layland LGBT Centre has been provided by Feasibility Funding from Social Investment Business. It is part of a national scheme to help local organisations take on a building which had previously been managed by local authorities. The fund will be used to develop a feasibility plan for the centre which will include legal and business support, architect and surveyor plans, and full consultation with Manchester’s LGBT residents to plan for the what the community needs now and in the future.

Amelia Lee, Strategic Director at LGBT Youth North West, said “We’ve come a long way since 2005, when we had just £10 in the bank and were fully staffed by volunteers. Going into 2015 we’ve got big plans for The Joyce Layland LGBT Centre, and this money will help us with the first step. It’s time to do some commonsense developments that will make us sound and stable as a social business, so that we can continue to serve and support young LGBT people and the wider community.”