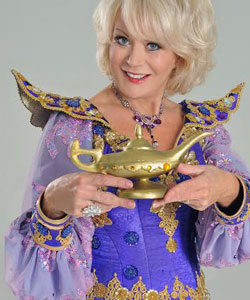 SHERRIE HEWSON – Genie of the Camp

She was ‘Loose’ for 14 years, recently rejuvenated Mrs Slocombe and her Temple Savage struts round the Solana as the queen bee of Benidorm. There's no one better qualified to play the Genie of the Ring in Manchester’s big pantomime Aladdin’than Sherrie Hewson.

A TV fixture since the seventies, Sherrie is busier than ever but managed to take some time out from rehearsals to tell me all about the festive production.

“It’s a big show on a massive scale. It feels like a Hollywood musical with fantastic dancers, amazing music and John Thomson! He's an absolute joy to work with. My genie of the ring is quite camp - as it's me it would be anyway - and has a touch of Joyce Temple Savage about her. She's quite posh northern and such fun to do so far.”

Most pantos feature double entendres and one liners incorporated into the script especially for the adults to giggle at but where do you draw the line?

“Innuendo-wise, I always think you can only push it so far. Kids are very sussed and on it these days so you have to be a bit careful but you can still have all the campness and outrageousness and silly fart gags which I think are very funny and acceptable.”

Doing a pantomime is definitely a marathon not a sprint  With two shows a day, six days a week it's a relentless schedule so how do you pace yourself?

“It can be quite a marathon. The school shows are especially riotous but they're usually in the morning with the second show a bit later on so it’s not too bad. I’ve done about a dozen pantos over the years but nowadays it all depends where it is. Manchester is half an hour from where I live and where my family are and when you’re doing all these shows and you're tired you really need your own bed and home comforts. My fellow 'Loose' lady Linda Robson only does panto now if she can get home at the end of each show.”

You've never really stopped working, from The Slipper & The Rose to Mrs Slocombe and are still going strong. Could you ever have imagined all this when you began your career?

“I’m very lucky because I’ve never stopped. I started on stage when I was four then went to RADA so I’ve never had a proper job in my life. I don’t even remember going to school because I was doing three shows a week in variety by the time I was five then serious dramas by the time I went to drama school. I came from a rich period in early seventies Britain when films were being made and there were loads of sitcoms and dramas every year. It was a different time.”

“When I talk to kids wanting to go into this business I advise them it isn’t something they’ll be able to get like I did because the industry isn’t the same anymore. I always say ‘get your qualifications and a good job and see acting as a hobby. If it works and takes off that's fabulous but at the end of the day you have to earn money.' I’ve been very fortunate to have always been around. That’s what’ll be on my headstone, ‘She’s always been around!’

You've appeared in Emmerdale, Corrie and Crossroads. Should we start a campaign to get you a part in Eastenders so you can complete the soap opera grand slam?

“Maybe you should! I don’t think anybody’s done all four. Eastenders is the only one left to put on the CV but I don’t know if they’re up for comedy. Corrie still is, though nothing like much as when I was in it as Maureen with Reg.”

You're best known for comedy roles but is there a part of you desperate to do something serious?

“I have done a lot of serious stuff over the years but people never talk about it. When I left RADA all I did was period dramas. I’ve worn many a bonnet in my time! Even In Loving Memory, the sitcom I did with Thora Hird was set in 1920 but once I did Russ Abbott’s TV show I became known for comedy and in this business very few people cross from comedy to drama and back again.”

“Comedy is the hardest thing in the world to do. You’ve only got to get a sad story we all relate to and you can make somebody cry but you can’t make them laugh. When you’ve got Benidorm, a character like Temple-Savage and great writing though, you’re there. I’ve done a lot of sitcoms and luckily always had really good writers. Being Mrs Slocombe in the remake of Are You Being Served topped everything for me though. Being on the studio floor that night was one of the most incredible, unforgettable experiences I’ve had. The set and costumes were totally from the period and the family of the original writers David Croft and Jeremy Lloyd were in the audience. They said the guys would have loved it and that made my night. I wish it had gone to a full series.”

The more traditional TV situation comedy fell out of favour at the start of the noughties. Out went the live audience in the studio and in came the 'dramedy' shot on film with shows like The Office and The Royle Family. However, the sitcom style so beloved in the 70s and 80s has made something of a comeback in recent years with the runaway success of shows like Miranda and Mrs Brown's Boys. Are you pleased to see this resurgence?

“I'm glad it’s coming round again though I don’t think many people know how to write sitcoms in that studio set style anymore. We have the best writers in the world in this country and it’s just about trying to get commissioners to let writers have their opportunities. I thought Ben Elton's Upstart Crow with David Mitchell was pretty good.”

You recently left Loose Women after 14 years. Are you missing the girls and was there anything you wish you hadn't said live on air?

“The girls are great and I do miss them and the show a lot but, as Arnie said, 'I’ll be back'! My mother always taught me to watch what I said and it made me self edit and think before I opened my mouth. That’s something the new panellists have to learn. It’s a very quick paced show and all too easy to say something then regret it. Sometimes though, a topic comes up and you can’t let it go. Once we had one of the girls on from Sex On The Beach. I don’t get that show at all and she said that was because I was too old to understand this new genre of television. I replied that she was a beautiful girl so why have sex on TV? Her defence was that she was drunk but we’ve all been drunk and compromised but it doesn’t mean we show it on TV. After the show she said it was very rude of me to say what I did but I just think there’s other ways to forge a career. If she’d been my daughter, I’d have kept her away from TV.”

You have a reputation for being a bit accident prone. What's the worst event you've had on stage?

“I’m very clumsy I’m afraid. I was on stage in A Midsummer Night’s Dream and had to walk down a few steps in a pair of tiny boots. I missed the top step, fell and broke my leg but within a day I was back onstage with crutches because the show doesn’t stop. I’ve had many moments falling through sets, into sets, under sets...I don’t handle it very well !”

Character actresses are in demand more than ever so what's ahead for you in 2017?

“Well, I’m going off to do more Benidorm in March until July and then possibly back for the next season of Loose Woman but we'll see. I’m really lucky because being a character actress you can move on to different things. Look at the likes of Judi Dench, Maggie Smith and the great Betty White. There will always be room for those kinds of actresses and it’s a great lesson for young actors. Create a character for yourself. Have a personality and persona that people can hook onto and love - or indeed hate. It's very much like panto where you can be a baddie and they still love you.”

Aladdin is at Manchester Opera House from 9 December to 8 January.