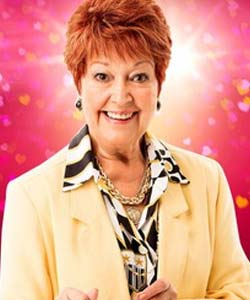 It's fitting that you’re appearing in a big musical set in the 1980’s because that was a fantastic decade for you wasn’t it?

Oh it was. That was when the popularity of ‘Hi De Hi’ was at its zenith, the ratings were enormous and it was just a great time. Even though the show was set in the late 50s, as far as success and career are concerned, the 80s was amazing for all of us in the cast.

It was also a golden time for the TV sit-com, particularly the live studio audience comedy. These shows are always looked back on with fondness and never really stop being repeated. Is it nice to be part of something that will pretty much live on forever?

Very much so though it’s interesting how comedy is very different now to what it was back then. There is the occasional old style hit like the Miranda Hart show and then there’s ‘Mrs. Brown’s Boys’. Brendan O’Carroll is a wonderful artist, camp and funny, and he does the old type of comedy in a modern way, like David Walliams and Matt Lucas did in ‘Little Britain’.

Playing the Mum of Daffyd (the only gay in the village) in ‘Little Britain’ must have been a lot of fun. Was it liberating to come out with all those near the knuckle lines?

It was hysterical! To be honest, I didn’t really know what I was talking about half the time. I had to ask my husband and my son what some of it meant, then I couldn’t believe I’d said it! The best way is to play that type of stuff is to deflect it and say it with a smile so that it’s palatable and funny. It’s interesting that as you get older you get these risqué parts. I think it adds to the effect when it’s coming from someone normally associated with family entertainment. In 'The Wedding Singer', I play Grandma Rosie who says all sorts of funny things like ‘is this your first time with the sexual intercourse?’

Do you find that one of the joys of getting older is that you don’t have to care so much about what people think and you can be more honest?

I think you can definitely get away with a lot more. Not that you want to offend or anything, you can just say things which need saying. My Grandmother could get away with saying all sorts of things. I lived with her for a long time and she was a great influence. I must be at least 50 years older than many of the company in ‘The Wedding Singer’ but I’m very lucky because the youngsters are super with me. They never keep me out of the loop and always include me and my husband in everything as we travel around.

I’m sure it’s a mutual appreciation society. They must be enjoying the opportunity to learn things from a showbiz veteran?

I think so - they come and ask me stuff and I try to give them stories about what I’ve experienced. I’ve been in the business almost 60 years now and worked consistently so I’ve seen a lot of different things happen. When we started in theatre we didn’t have personal mics, it was all projection.

Last year the BBC re-made classic comedies such as ‘Porridge’ and ‘Are You Being Served’ and got a very lukewarm reaction from the public. Do you think these shows are better left alone?

I have to say yes its best to leave things as they were. You certainly couldn’t remake ‘Hi De Hi’ now. If you put it into any other setting it really wouldn’t have the same impact. The whole thing was set in a technicolour place with the yellows and blues. It was very in your face colour and fabulous and that matched everything that went on in the series.

Not everyone has the ability and timing needed to perform funny roles. It’s often said that comedy is the hardest to play as - unlike straight drama - you know immediately if a show is working because you either get laughs or you don’t. Does that make it more daunting?

Yes it is quite and it’s all very instant. I find it fascinating just how you make people laugh. I call it the science of comedy – you’re saying the lines on stage and interacting with the cast but there’s a tiny part of your brain listening to the audience. It also varies from show to show and throughout Great Britain audiences have different collective concepts. The fun of a long tour is discovering what works in different areas.

Touring is part and parcel of an actor’s life but the longer runs must be a bit draining at times. How do you get over such hurdles?

This tour goes on until October and like any job, you might get halfway through and think ‘Jeez!’ but then you get over it because if you like the work that keeps you going and I love this show. ‘The Wedding Singer’ is a camp wonderful piece. It’s written by the same guys that wrote the film and this team have done a great job on it. It’s a lot of fun, it’s anti cynicism and it’s sheer joy from beginning to end. All things we need right now. It’s got a wonderful cast of strong musical theatre artists and it’s such a happy piece.

I’m very lucky that I don’t really need to work. I do it for love now because I adore it. I don’t know how long I’ll continue to get employed but I’d have to find something to do otherwise I’d go mad!