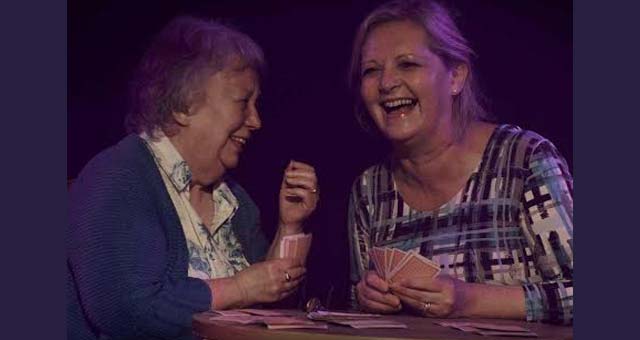 The 2018 Greater Manchester Fringe is almost upon us. Now in its seventh year, the festival has grown from a handful of shows in just six venues to featuring dozens of performances all across the city.

With low cost tickets providing greater access, especially for the first time theatre goer, it's never been easier to go along and enjoy some new, original, accessible theatre.

Among the new work on offer this year is ‘Peg & Bessie’. A funny, sentimental story about the lives, loves, laughs and losses of two sisters in the Autumn of their lives.

Canal St Online asked me to contact the writer of the play for an interview. I was wary at first as I’d heard he was a bit of a diva. A demanding, elusive chap who… I can't keep this up. I wrote it!

How do you interview yourself though? I could take ‘me’ out for coffee, but I'm a lousy date so that's not much of an option. Let me just break it all down to a few areas and hope for the best...

The inspiration behind ‘Peg & Bessie’

My late aunties were very much the starting point, although it's only very loosely based on them. When I think back now, with the perspective of an adult, I realise just how incredibly strong that generation of women were. Married 40, 50 or more years - and how many marriages last that long these days? - those women just kept on going once widowed and adapted to life without their longtime partner. On the rarer occasions when the wife died first, the husband didn’t cope well and often didn't survive that much longer. I thought that this difference in the sexes was an interesting area to look at. What makes women more resilient?

I grew up in the 70s when the men were always out at work. Although many of the women worked part time they were still always there for their kids so my main influences were almost exclusively female. My Mum, aunties and grans were incredibly influential when I was a child. Paternal leave wasn't a thing then and Dads often had slightly less of a connection with their kids, though there was a lot of love there. As a kid, I loved shows like ‘The Liver Birds’ and ‘Rhoda’ which featured strong, funny, female characters. I also worked in arts marketing for over 12 years which was a largely female working environment.

I’d dabbled occasionally but, like many people, put the results in a drawer and forgotten about them. At the start of 2017, Hope Mill Theatre was looking for new writers work to present for one-off performances. I looked at ‘Peg & Bessie’ again for the first time in ages, did a few updates, submitted it and it was chosen. Just after that I was one of ten writers asked to write a short piece for a show entitled ‘The Object Of My Affection’ and this year my monologue ‘Physical’ was performed at the MancMade Festival in March. Now 53two are giving ‘Peg & Bessie’ a new lease of life at the festival so I’ve been very lucky.

Sue directed her daughter Rosie’s show ‘Narcissist In The Mirror’ last year. I really enjoyed it and thought Sue would be a great fit if ‘Peg & Bessie’ got a new run somewhere. We met at the MancMade festival the evening my piece 'Physical' was on and, working on the principle of ‘if you don’t ask you don’t get’, I said to Sue ‘I want you to direct my play’. Behind her beaming smile she was probably thinking ‘just be nice to him, he might be dangerous’ but when Simon at 53two sent her the script she said 'yes'. It's exciting to have someone of Sue's calibre overseeing it all. I’ve also added an extra scene and re-jigged bits since last time and I’m really looking forward to seeing it brought to life again.

Reasons to buy a ticket

It’s just under an hour long so it’s not a long commitment in this world of no attention span! We’ve also got Jenny Gregson and Kerry Willison-Parry in the title roles. I guess my aim is to elicit some laughs and possibly a little tear all in the space of 50 minutes and these actresses are brilliant at switching from humour to pathos in a heartbeat so I think people will enjoy spending some time with these characters. If you come out of the show with the urge to call someone close to you or give them a big hug then it’s worked.