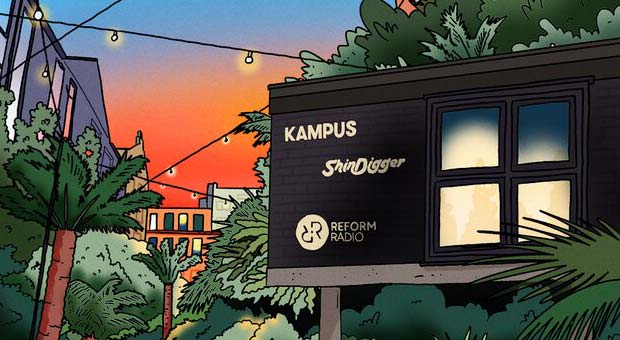 Little David Street, a once forgotten cobbled street has been closed off for a decade, but is now set to become a bustling, alfresco hang out, buzzing with bars, cafes, shops and restaurants.

ShinDigger will bring a vibrant selection of fresh session beers and summer vibes to the Kampus neighbourhood.

The party will see music stages curated by Reform Radio with a mixture of funk & soul, garage, disco and bass sets. Alongside the main stage on Little David Street is a ShinDigger bar, a chill out stage in the Kampus garden, street food traders and a canal side food and drink offering by Le Social, who have taken residency at the Bungalow.

Nestled either side of Little David Street are Minshull Warehouse and Minto & Turner. Minshull Warehouse, once a Victorian shipping warehouse, has been lovingly restored to create some of the city’s most individual apartments. Minto & Turner is a red-brick, grade II-listed canal warehouse, originally built to store cotton transported on the Rochdale Canal, now brought back to life with contemporary loft-style apartments full of original features.

Kampus is once again breathing life into this forgotten corner of Manchester city centre, with Little David Street being one of several pedestrianised streets that cut through the Kampus garden neighbourhood – all open to the public.

The Little David Street Block Party will be a ticketed event, priced at £5 for early bird entry or £7 thereafter. Tickets can be purchased here:

It will take place on Saturday 4th September, 2pm - 10pm.

Kampus, is a vibrant new neighbourhood built around a garden developed by CAPITAL&CENTRIC and HBD. Its collection of old and new buildings offers a melting pot of architectural styles and builds on a rich cultural heritage, making use of historic buildings that lay derelict for years, right next to the famous Canal Street in Manchester’s Gay Village and just minutes from Piccadilly Station.

The Kampus gardens and Bungalow are the central feature of the community and are permanently open to the public, with the Bungalow operating as a village hall for pop-up events and community groups.  The neighbourhood is alive with events and will be home to independent bars, restaurants, cafés and retail from brands including General Store, Common & Co / Cornerstone and Bread Flower.

Residents have already moved into the one and two bedroom apartments in North Block. This beautiful red-brick new building sits alongside the newly launched refurbished 1960s brutalist tower called The Stack, its sister building South Block and two beautiful Victorian shipping warehouses, Minto & Turner and Minshull House. All of the buildings at Kampus are set to fully open over the next three months.

Residents at Kampus will have access to a brand new gym with free weights, cardio and core equipment and a yoga studio, a 24 hour concierge service and amenities from dog walking, dry cleaning, PT sessions and yoga, a private cinema, lounge, dining room and a number of terraces.  What’s more, residents can move into their brand-new apartment with no deposit to pay.

To book a viewing visit

Autumn and Winter programme announced with a strong LGBTQ line up.