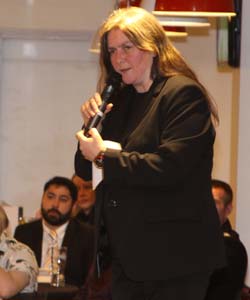 LIVERPOOL STANDS UP IN CELEBRATION OF LGBTQ SPORTING STARS

Pride in Sport the inaugural celebration of LGBTQ Sporting Personalities and their Allies, was held last night at Liverpool Football Club (the first premiership football club to officially march at a PRIDE event) showcased role models from across the multi-disciplines of sport.

With a number of LGBTQ sporting stars in attendance Claire Harvey, Paralympian; Sophie Cook, the Premiership’s first Trans Photographer; Suzanne Smith and Nicola Hobbs, FA Women's' Super League, Philippa Tulliett, Welsh Rugby Player, Sally Walton, GB Hockey Bronze Medallist and semi-professional boxer Debbie Mills, together with over 100 members of Liverpool’s diverse community, both young and old alike, celebrated the visibility of high achieving LGBTQ athletes and the message that their choice to come out sent to whole of Merseyside and beyond.

Inspirational speeches from keynote speakers Sophie Cook, Barclays Premiership’s first Trans Photographer and Paralympian Claire Harvey told of the importance of being true to oneself and how transferable skills in sport can help when faced with adversity in other areas of life.

Sophie Cook gave a heart-warming account of her transition to an out and proud transgender person working within the Sports industry, as the official photographer of AFC Bournemouth. Having initially decided not to come out, just in case the news affected her team’s chance of progressing to the Premier League, Sophie, then living by the name of Steve, thought that making the decision to tell her employers that she was transgender would mean the end of her sports photography career.

Sophie couldn’t have been more incorrect, having received full support from her club, her friends and her family. This story has a very positive ending and Sophie is very happy as an out transgender person working within the sports industry. A thought from Sophie’s 12 year old daughter summed up the feeling “You are my hero. Steve was good but Sophie is better”

Sitting volleyball Paralympian Claire Harvey added in her equally inspirational speech, that she had spent a lot of her career trying to fit in. It was within a team, where individuals work together for a common goal, that Claire found her place. It was in sport (originally Rugby) where Claire fitted. Having experienced a life changing accident in 2008, where Claire lost the use of her legs, Claire switched her sport to sitting volleyball and again found herself in the situation, questioning whether to come out to her new team.

In a speech full of wit and humour, Claire received a huge round of applause after the account of her experience as one of only two out LGBTQ team GB Paralympians together with her call for everyone to be inclusive. “It is your responsibility to consciously include all members of society because if we don’t consciously include we unconsciously exclude.” she urged.

Liverpool Pride’s Joan Burnett and Diversity Role Model’s Phil Nicol, spokespeople for the charities benefitting from the evening’s fundraising activities, echoed the message of Claire, Sophie and Ann adding that we can all be role models within our community.

A representative from headline sponsors Amy Stanning Co-Chair of Barclays Spectrum (LGBT Colleague Network) said: "Barclays is proud to sponsor this inaugural event celebrating LGBT role models in sport. Barclays supports diversity and inclusion in all aspects of society as people give of their best when they can be themselves. Barclays is a leading employer in Liverpool, last week opening its refurbished Wavertree Centre for 1300 colleagues."

Emma Baldry event organiser form Planet L Events said “I am thrilled with the success of tonight’s event and thank everyone who helped to make evening such a wonderful occasion. We plan to make Pride in Sport an annual event and already have plans for 2017 and 2018. Continuing to celebrate the achievements of LGBTQ athletes in sport is very important for society in general, but sport in particular in order to readdress the balance of equality. Everyone should be able to compete at their chosen level regardless of sexuality and we will work tirelessly until the only factors that matter when it comes to sport is aspiration and dedication.”