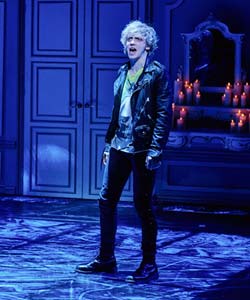 Big. That's the only word to describe anything Jim Steinman-related. It's no  surprise then that the much anticipated 'Bat Out Of Hell' musical continues that tradition - big songs, big set, big show. Right in the eye of this musical storm is Andrew Polec prowling round the stage as lead character Strat.

The show has been previewing to wildly enthusiastic audiences for a couple of weeks and had its official BIG opening this week. I managed to grab a quick chat with Andrew during a break from rehearsals.

Performing these epic songs each night is most definitely a marathon not a sprint. How do manage to keep yourself vocally prepared for such a challenge?

It does take Olympian vocal stamia just for one of the songs but we've had a great vocal coach and plenty of time to work on this music. We do only light exercises though because you want to save your power and only whip out the full tank for the show. As soon as you're up there though you feel this adrenalin rush and it sort of powers out of you.

The set also hits you in the face. It's a wonderful interactive world that helps feed your imagination. When we were rehearsing in London there was a lot of architectural things to work with but when we arrived here in Manchester we were totally taken aback by how huge this whole set is.

So here you are, still early on in your career, leading a brand new musical based around one of the best selling albums of all time. You must be pinching yourself...

It's a dream come true, it's huge and I'm grateful everyday I get to work on this. It feels like I found this audition either by fate or accident. I was big into sports as a teenager but had a bad bicycle crash and suddenly my life changed. I was in the trauma unit for five days and there were even fears that I wouldn't walk again. As a result of the head trauma I suffered I had to stop doing sports. I didn't know where to channel my energy until I found music, theatre, Meatloaf & Jim Steinman stuff and I've been doing rock and roll ever since. I moved to New York City and after just two months, someone told me about auditions for this musical and I couldn't believe it. I went along with a big drum that I banged away at and they were impressed enough to invite me to the workshop. That also went really well then, suddenly, they were flying me out to the UK. This is already more than I ever could have imagined. It's all happening so fast and has been a massive, upward trajectory.

I'd always been doing theatre or playing in rock bands but never knew how to mesh the two together and then, all of a sudden, this comes along and exceeds my wildest dreams.

It is an extraordinary sequence of events that's led you to this. Are you a bit of a fatalist?

I guess I do believe there's a plan though I dont think anyone really knows why things happen. At the first preview performance, when I did the first line of the monologue and the whole crowd screamed, I knew I was in the right place at the right time.

You've been over in the UK for a couple of months now. Are you becoming a bit of an Anglophile ?

I'm still adjusting to the many words that I still don't fully grasp but it's an amazing adventure. People are sometimes a little taken aback that I'm American when asking for signatures at the stage door. I start to speak and it's like “Wow, you really talk like that?” and I go “Yeah!” I obviously think about home but my girfriend is coming over next week and I'm hoping to get my parents across at some point too.

As a fan of the album and his work, how was it meeting Meatloaf ?

We had a wonderful bonding experience when we did the promotional weeks. He gave me a great advice about how these songs take a lot of commitment. You can tell by the way he sings them that he's fully giving his all to it. He said that as long as you work really hard on the songs, make them your own and get them fully broken in, then you can fully enjoy them and give them out to the audience as a gift.

The fans know this album and the songs note for note. Is there a slight pressure to do them justice?

It's a pleasure as opposed to a pressure. Knowing that you've got 2,000 voices in the crowd on your side when you sing plus an amazing cast up there with you, you just feel that you're all in this together. It's like creating a greater art or producing a new creature when the performer performs and the audience do too. Their complete love of the show carries you on.

As you enjoy this adventure, dare you even contemplate what's next?

I'm so of the mind that you have to live in the moment, understand what's going on and take it all in and this is a LOT to take in! Whether it's theatre, recording or something different, I want to be part of work where I can share as much joy with people as possible.

Jim Steinman's Bat Out Of Hell, The Musical

Details and to book.