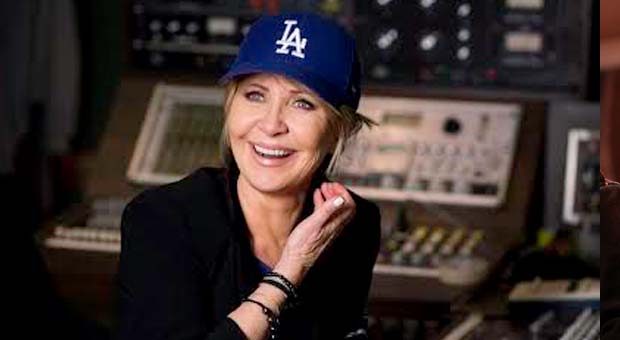 Lulu was just 15 when she had her first hit in 1964 and has been a fixture of the entertainment business ever since. She’s done pretty much everything and worked with everyone.

Forget Six Degrees of Kevin Bacon where you link the actor to anyone in the business in six moves. You can do it in two with Lulu. From music legends such as David Bowie, The Beatles and Jimi Hendrix to light entertainment icons like Morecambe & Wise, Bruce Forsyth and Basil Brush!

Celebrating 55 years in the business, Lulu’s still going strong. After guesting on Take That’s recent arena tour, she’s appearing at summer festivals before embarking on her own 35 date ‘On Fire’ tour of the UK this Autumn.

That’s true! The lighthouse, I love that…and I can tell by your voice that you’re Scottish!

I am but I’ve had to modify the accent a little since living down south, an issue that you know all about!

I certainly do. When I first went down to London they didn’t understand a single word I said to start with because I had a VERY thick Scottish accent. You never lose it but you have to tone it down so that there’s no misunderstanding.

You’ve just done the Take That tour, there are summer appearances coming up and then there’s your ‘On Fire’ tour. You never stop do you?

That’s the intention. I’m very resilient and love hard work. I’ve always had a strong will and performing is what I do but you never know if it’s going to last so I am very, very lucky because I absolutely love it.

You’ll always sing some of the hits but it’s never about nostalgia for you. You always seem to be looking forward. Almost like you’re still waiting to be discovered?

You’ve absolutely got me. I once said that when I die the epitaph on my headstone would read ‘still waiting to be discovered’. I’ve learned a lot of things along the way but I’m still learning and definitely always looking to see what’s next while still trying to live in the day. That’s a challenge in itself.

There must be a steely determination within you to have lasted when so many others have been and gone. What’s been the key to your survival?

I love what I do. I don’t know why somebody else might not have lasted but I think if you absolutely love something you’re going to work at it. I have resilience so when I get knocked down, I get up again. I’m extremely vigilant and disciplined because I would love to continue it for as long as I can. I know that I’m one of the lucky people.

It’s not an easy business is it?

It certainly isn’t! You have to be resilient but it’s hard for anybody, especially if you’re a sensitive soul. For those who can brush things off, it’s enviable. I have cultivated that but it doesn’t come naturally. I still think “Ooh they don’t like me” and “why did that not work?” but I’ve learned to think that there must be a reason and I can either fix it or move on. You also have to know when to back off but that comes with age. Also, never take yourself too seriously because that will kill you. I’ve done a lot of hard work on myself reading and studying which has been key.

If anyone has earned the right to have a few ‘diva moments’ it’s you. Please tell me you demand gold leaf wallpaper in dressing room or a few freshly peeled grapes before you go on stage…

You buy your own grapes? I’m shocked!!!

Well that’s another important thing - you have to learn how to delegate. It’s not so much about being a diva or being really demanding it’s just that if you’re a perfectionist you’re tough on yourself as much as anybody else. The people who work with me, get me and realise we’re all after the same outcome. Of course I also laugh at myself. When you get to my age you really have to be able to laugh at the idiosyncrasies. I’m very self-sufficient and used to carrying everything that I need for myself so my rider is just bottled water.

You’re letting the diva side down there Lulu

Well I do love coconut milk and the one I like only seems to be available at Pret so that’s my diva demand requirement - wherever we go there’s got to be a Pret! A good cup of coffee and a Danish never goes wrong either.

In almost every interview people refer to your age. I still feel about 15 and I’ve never understood what an age is. We are who we are and the number is just that, a number.

I agree with you, it’s an attitude. Age is a privilege but rather than ask your age, it’s better to ask ‘are you a member of the Can Do Club?’ My friend was fashion editor of GQ for many years and is a perfectionist. She titled me ‘Director General of the Can Do Club.’ If you no can do, I wont work with you! I love to work with people who, even if they haven’t been able to achieve something, they gave it a really good shot. That’s all you can ask of someone. I’m always really thrilled when someone gives something a chance even if it doesn’t work out.

I look OK for my age, all thanks to your ‘Timebomb’ skincare products of course.

Can you stop bringing out new products for a bit? I have to go to bed an hour early now just to layer all the creams on my face.

Ha! You learn to get it done more quickly. I’m really fast now at getting it done.

Another area that requires care is the voice. Yours is still going strong so I imagine you must do lots of vocal warm ups?

You have to. If you’re going to do a job, you want to do it well so you have to put the work in if you’re going to last. Discipline is key. I’ve been working with Take That on their tour and I noticed that the boys now do more vocal warm ups than before and eat well. When you’re young it doesn’t matter and you can just brush it off but as you get older and more mature you need to learn that it takes longer to warm the voice and the body up…everything takes longer!

Tell me about it. I’m now making at least one trip to the loo during the night.

I’m thinking of getting my perineum laminated.

(squeals of laughter…) I love it. That could be painful though!

You’re so associated with ‘Shout!’ Do you ever want to yell ‘I’ve done other songs you know’?

I’m eternally grateful for it but it’s true that sometimes I wonder if people think I can only do one thing. It depends on where I am. In America many think I can only do ‘To Sir With Love’ and here it’s ‘Shout’. I mean not always, but on the whole. Mind you, thanks to ‘Ab Fab’, when I’m walking down Madison Avenue it’s ‘Champagne for Lulu’!

My favourite song of yours is ‘Where The Poor Boys Dance’.

That’s because you’re Scottish and you understand it. It’s not just exclusive to us but if you’re Scots you definitely get it. That song allows me to show a softer vocal and it’s very close to my heart. It’s about missing the past in a way, looking back and being sentimental. I don’t think I’ll ever get over the death of my parents. I have to just accept it but it’s always there. It’s the same with all heartache but that’s the making of you and what gives you character. It makes you a better person because you’re more vulnerable and grateful for what you’ve got. It’s just having some kind of acceptance of the way things are sometimes. You also have to look at how lucky you are. That’s the key to life.

‘Champagne For Lulu’ aside, can you see ‘husband for Lulu’ happening any time soon?

No, I don’t. If it happened it would be fine but I don’t feel I need that and I’m kind of set in my ways. I used to think that the way to be happy was to be attached to a man and that if I was married to some fabulous, gorgeous guy then I’d be sorted. That’s a lot of responsibility to lay on a person. If I was to be with someone now I think they would have to have their own house to be honest with you.

Get a dog. They’re much more reliable.

I’m getting a Cockapoo! A friend of mine has one and when I showed my granddaughter a picture she said that I had to have one. I lost my Westie in January and said it was too sad and painful at the end to go through it again but now I’ve got a new dog coming.

For tickets go to www.luluofficial.com

Divina raises money for The Proud Trust and new mural

We are delighted to share the news that Didsbury Pride will again take place this September.