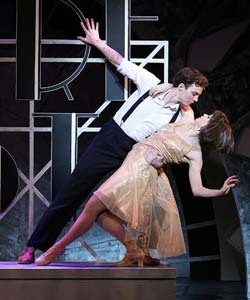 The pros don't hibernate while the show is off the air however. Current glitter ball winner Joanne Clifton has been on tour playing the lead in the musical 'Thoroughly Modern Millie', now heading to Manchester's Palace Theatre.

So, has it been fun being 'Millie'?

'The role is perfect for me. It's a character I've always wanted to play so it's an absolute dream come true. I can relate to it so much because she came from a small town and moved away to follow her dreams and I come from Grimsby and left home for Italy when I was sixteen to follow my dreams. When I came back I restarted singing lessons and the first song my teacher worked on with me was 'Not For The Life Of Me', the opening number in the show, so everything feels like it's been pointing towards me doing this'.

Many people might be surprised to see you in a role that requires you to be a singing, acting and dancing triple threat. Has it been satisfying to show the public that you're an all rounder?

'I like that I get the chance to try and surprise audiences that probably only know me for my dancing or think I was only cast because I've been on TV. The very opening of the show is just me on stage and when I turn around and start singing it's really exciting and hopefully a pleasant surprise for the audience too! I'm not trained in theatre school but I did take acting and singing lessons when I was younger and when I returned to the UK to do 'Strictly', I started everything up again and have been working at it ever since'.

Many people will be familiar with the film version of 'Millie' starring Julie Andrews and Mary Tyler Moore but it's been a few years since the show was last staged. Is it ripe for revival?

'I haven't actually watched the film in years. Julie Andrews is a legend and I can't be compared to her and I didn't want that legacy to affect my performance. I have heard that the musical is a lot different from the film though. It's a really funny, entertaining comedy with glamour and sequins and lots of dancing from lindy hop to tango and tap. It's definitely a musical all ages can enjoy.'

One of the most iconic images of the character is that hair - a dark, jaunty bob. What choice did you make, bob or wig?

'I went with the wig! I've had so many different hair colours on the three years I've been on 'Strictly' that I'm now staying with my natural colour which is blonde. On year one, there were too many blondes on the show so the producers asked if I could go brown. The next year I came back with red hair and then, for last year's series, I went back to blonde. When I got the 'Millie' part they asked if I wanted to dye my hair the brown colour associated with the character and I said 'no thanks' in order to give my hair a break so it's wig all the way!'

Are you looking forward to bringing 'Millie' to Manchester?

'Definitely, although I don't always know where I am and where I'm going next as seven months on tour has really taken its toll. It's been amazing though and I love perfoming live. It's a genuinely wonderful cast and crew too and I've learned so much from them. My friends in musical theatre say I've been really lucky in that respect. There's been no bad feeling or gossip in the company and we've become really good friends. It's been so much fun and I keep getting told off for laughing on stage too much.'

After 'Millie', is there another musical theatre role you've always longed to play?

'Rose in 'Gypsy'. I saw Imelda Staunton do it five times and she made me cry every time. I sat there in awe and just thought 'I wanna do that role!' I also really want to work in the West End though I need to do a lot more work before then but that's the next goal and I'll just keep going until I get there.'

The hype and intrigue about who is taking part in 'Strictly' 2017 has already begun. How are you feeling about defending your 'Strictly' crown?

'We don't get the phone call inviting us back until around about now so I don't actually know yet. I should find out any day now but no one is safe so you never know!'

I'm sure you'll be in there! If you were given a say in the matter, who would be your ideal partner this time round?

'Prince Harry because I really fancy him! I know he's got a girlfriend but there's always a chance plus everyone would vote for him. My other dream partner would be Karl Pilkington who would be hilarious and it would be worth it just for the laughs in the training room.'

I know it's all about the taking part and all that but how soon do you know when you've got a dud partner who you know won't even make it to bonfire night?

'Ha! You see it straight away but it's still good because it becomes a real challenge for you as a teacher and it's really satisfying to see them get through. The public like people who progress and have room for improvement. In my first year I had Scott Mills and he could only walk at the start but ended up getting to week six perfoming on live TV. That's a big achievement and we got on so well so it was so much fun. At the start of a new season we all meet up beforehand to rehearse the group dance for the launch show and that's when producers look at us and work out who looks good together and who might get on well with each other.'

You must have been ecstatic when you got paired with Ore Oduba then?

'Ore hadn't really danced before but he was naturally talented, although on a Monday he'd be awful. He was still buzzing from the weekend so getting his head round a new dance and technique was painful sometimes but then he'd come back the next day and be amazing.'

One of the big talking points about last year's final was not only that you won but that you beat your brother Kevin making him the bridesmaid for the fourth year in a row. How could you?

'I know, beaten by his little sister! I've always been the more competitive of the two and of course it was fantastic to win but I did feel a bit like 'Oh Kev'. I did say sorry but he was really proud of me and to be honest I've always looked up to him and he inspires me and his choreography is amazing which is why he's always a finalist. I still beat him though!'