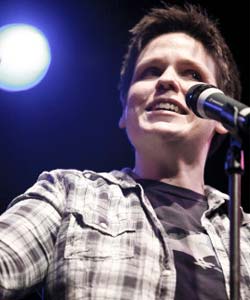 Kate McCabe has been building a name for herself on the comedy circuit with stand up spots and improv shows and this Saturday she performs her first ever 50 minute piece 'Stuff & Nonsense' at the Manchester Women Of Comedy Festival.

Why should people come and see 'Stuff & Nonsense'?

“It's an hour well spent! People will be laughing, having a beverage and supporting a fantastic festival and the arts. All good reasons to go out.”

What's the theme of the show?

“It's about not being embarrassed to still have a head full of fantasies. As we get older it's easy to become cyncial and abandon your hopes and dreams - we feel we should grow out of them but they're important. I give examples of things that I always thought would go fantasically well in my life but didn't and reveal how I managed to bring positives to them.”

So what's your most recurring fantasy?

“Comedy gold! The biggest held fantasy is the one that starts when you're a kid and what you want to be when you grow up. What I wanted was to be in comedy and I've never let that go. I'm still growing up really.”

Are you aiming to be everyone's new gal pal once they've seen your show?

“Well I really try to balance my social calendar pretty delicately with a mixture of work and pleasure but I will obviously try to 'gal pal' as many people that come along as I possibly can!”

Does being gay always filter through to your comedy?

“The show is anecdotal with true stories and the truth for me is always going to have an element of coming out as a gay performer. If you want to share anything about your life you're going to have to be honest about it in order for it to resonate with the audience. There are several points in the show where, if you didn't know I was gay beforehand, you will after!”

Which term do you prefer - comedian or comedienne?

“Comic! It also has superhero connotations which I love because I'm a giant nerd.”

How do you deal with hecklers?

“I'm patient to a degree. I want everybody to get along so I'll give someone the benefit of the doubt once or twice but if they continue disrupting the show, I'll ask them to leave or make it damn uncomfortable for them if they stay!”

Who are your favourite funny females?

“Ellen Degeneres is a real hero not just to the female comedy community but also to the LGBT community as a high profile person who came out when it wasn't happening elsewhere. I also love comedy actress Amy Sedaris, Tina Fey, Dawn French and Jennifer Saunders.”

Are women funnier than men?

“I don't think gender makes a difference. Some people are funnier than other people. I could just as easily rattle off 5 men and 5 women from my list of favourites. As a women in comedy though, you are very connected and have special feelings about the female comics you admire because it is still a 'thing' to be a women in comedy.”

This is your first full length show...are you kakking yourself?

“Oh God 100%. I've always said comedy is the one thing that keeps me regular and never has this been more true than it is right now!”

Describe the show in three words?