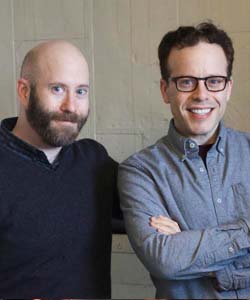 Yank! Is the latest collaboration between London-based Aria Entertainment and Manchester's very own Hope Mill Theatre.

Following their success last year with 'Parade' and 'Hair', the pairing now bring us a gay love story set during World War 2. The musical, based on the real history and events of the time  tells the story of Stu, an awkward young man from the mid-West of America who is called up to serve in the forces in 1943.

Featuring a 12 strong cast and a 7 piece orchestra, the show has been written by the Zellnik brothers - Joseph composed the music and David wrote the script and lyrics.

David took time out from rehearsals to chat to Drew Tosh about the show.

The musical has themes of identity and what it felt like to be a man back in the 1940s. Are these areas still as relevant today?

It is a question that is timeless across all cultures and it feels incredibly relevant right now. We’re living through an extended conversation about gender, identity and the fact that there are many ways to be a man.

At the start of the show, our lead character Stu has a very strong idea about what a man is but a very different opinion by the end of the show. He goes from feeling like a failed man to being the bravest person on the stage. He also has to figure out whether he's man enough to make it on the front and also what kind of gay man he wants to be. There are many types of gay and straight men in the show that Stu can aspire to. We’ve taken the classic war movie idea of ‘it takes one of every kind to make an American squad’ and queered it by making one of those kind gay.

The piece was Inspired by actual memoirs and personal stories still regularly come to light from WW2 documents. Were these stories what inspired you to write the show?

The first impulse was stylistic. My brother and I wanted to see if we could write something as tender, romantic and lyrical as the 40s musicals we grew up loving. We decided that we had to tell a story that couldn’t have been told at the time. When we read ‘Coming Out Under Fire, The History of Gay Men & Women in World War 2’ by Allan Berube we saw it wasn’t just an interesting WW2 side note but a pivotal moment. This was when many gay men understood they might be in a category called ‘homosexual’ because the army was the first place that ever asked them the question. This began in 1940 and, at the same time, almost 16 million men (and some women) that might never have met otherwise, found each other in networks across the country.

The 'don’t ask don’t tell' law (prohibiting military personnel from discriminating against closet homosexuals while barring openly gay, lesbian or bisexuals) was only repealed 6 years ago. Do you think Trump will be a worry for gay servicemen and women?

I didn’t think he’d win so I’m really sceptical of anyone who thinks they can tell you what’s going to happen anymore! As a gay person I'm scared and angry at the threats against gay civil rights and all the anti-Muslim, anti-immigrant, anti-Mexican, anti-women hysteria. We have to fight for all of them but I haven’t yet heard of anything that suggests views on gays in the military are going to change. Trump himself doesn’t seem it but he has surrounded himself with tremendous homophobes.

Hearing the show at the read through after Trump was elected was interesting because many of the corny ideas and stereotypes in WW2 films and B movies don’t seem as corny anymore, especially in today's America.

The show is inspired by your love of 40s/50s musicals. Song titles include 'Your Squad Is Your Squad', 'Saddest Gal In Town' and 'Betty'. Was it difficult to write lyrics for songs styled from that era?

At times but it was a real labour of love. My brother and I grew up singing Rogers and Hammerstein, Cole Porter and the like so for us it was more a case of 'can we actually get away with really geeking out in front of people and show how much we love this music?' Each track is inspired by one of our musical heroes so one might be our Jerome Kern song and another our Irving Berlin number and it was delicious work to do. The deeper you know the show's catalogue, the more you realise that every one of these new songs has something in the lyric that couldn't have been written at the time, including the love song between two regular guys living together.

I couldn’t imagine writing anything with my sibling without things erupting into an argument after about half an hour! How did you and your brother manage to do it?

Any working partnership can be very intense and that's before you add the emotional elements of us being brothers close in age and gay. When we fight, and we do have arguments, there is a base level where we know we'll compromise and figure things out because we can’t walk away from projects. The commitment and love  counteracts the natural tendancy to disagree and we're also both passionate about what we think and do. My brother is amazingly talented and what’s neat is that we can draw on such a range of mutual experience. I can say ‘remember when we saw that show and the singer did this? That’s what I want for that song.’ There’s a shorthand and shared vocabulary that Joe and I have.

The first version of Yank! was back in 2005. I imagine that it has evolved considerably over the years.

Oh yes. There have been very different versions since that first time at the New York Theatre festival. We've used different songs and plot devices along the way - at one stage we even had a dream ballet sequence! The show is now a combination of the best parts of all the versions and it feels that it's where it needs to be.

Do you think 'Yank!' will be received differently by audiences here in the UK to those in the States?

We had our moments where we wondered if it was too American but Katy Lipson, one of the producers, felt the UK would embrace it. At its heart it's about the terror of not feeling like a man, the terror of falling in love and the terror of going to war and these are concerns that transcend borders. I think the bigest difference is that the UK memory of war is obviously about Europe being bombed, the holocaust and defeating Hitler. In America during the 40s our biggest thing was avenging Pearl Harbour. The war in the Pacific was brutal and wasn't the same concept of fighting in a civilisation you could recognise, it was about Americans going to a land they didn't know or understand. I do think America and the UK are siblings though. You had Thatcher and we had Reagan, you have Brexit and we have Trump – we seem to go hand in hand in disaster. Even the word 'yank' became popular because that's what the Brits called us during World War One.

There is a saucy old joke that American servicemen posted to the UK were called 'yanks' because of their charismatic effects on British women's underwear – one 'yank' and they were down!

Ha! When some people hear the title of the show they do think it'll be a very campy, very dirty, queer re-telling of WW2. It definitely isn't though there's some sex in the show and explicit chat about the kind of sex that some of the servicemen found with each other on beaches and in bathrooms and secret places. 'Yank!' at its heart though is incredibly romantic and very much about falling in love and the kind of sacrifice and bravery you need to make that love last during and after a war.

And it's coming to Manchester in March!

Yep! We had offers to do the show in London, but Joe and I trust our gut and we felt that producer Katy Lipson, director James Baker, Hope Mill Theatre & Manchester were perfect for our show and it all feels right so fingers crossed!