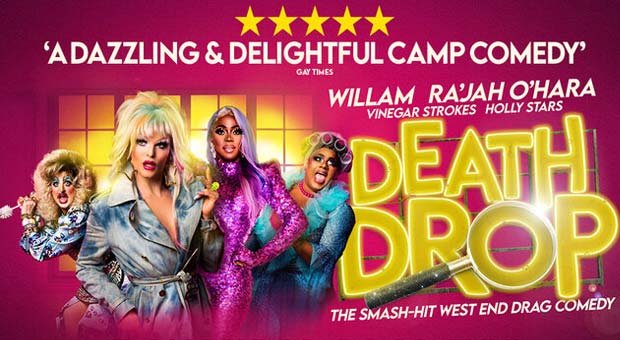 Starring Ru-Paul US drag legends Willam and Ra’Jah O’Hara and a full cast of leading drag performers, Death Drop is the Smash-Hit, Five Star, Drag Murder Mystery direct from the West End! ‘A Dazzling and delightfully camp comedy’ that is ‘Jam-packed with hilarious one liners’, Death Drop is the guaranteed laugh-out-loud comedy we all need right now.

Set in 1991, a gaggle of guests gather on the mysterious Tuck Island for a dinner party like no other. The tension rises as the outrageous guests reveal their questionable pasts and hidden secrets. As the ferocious finger pointing and savage speculation begins, one by one they sashay away, until at the last, nerve-shredding, side-splitting moment we find out who-dunnit!

Tickets are now available below via READ MORE