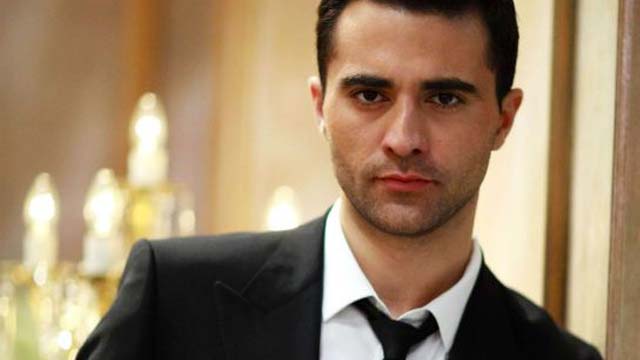 If there was an award for never giving up, Darius Campbell would surely win it. After THAT TV audition in 2001 on “Pop Stars” while trying to make it into pop group Here'Say, the plucky Scot picked himself up, paid a trip to the barbers then, undaunted by his first experience, auditioned for the first series of “Pop Idol”. He came a creditable third (behind Will Young and Gareth Gates). This led to a run of hit singles including chart topper “Colourblind”. He's since enjoyed success in musical theatre including roles in “Chicago”, “Guys & Dolls” and “Gone With The Wind” and is now starring opposite Sheridan Smith in “Funny Girl”.

Your character in “Funny Girl” Nick Arnstein isn't easy to sympathise with is he?

He's a gambler but he's not the very definition of a fraudster because his biggest investment falls apart for environmental reasons outwith his control. His intentions are good and he feels that the need justifies the end so he's definitely not a bad guy.

What's it like appearing with 'national treasure' Sheridan Smith?

I adore her. The relationship between our characters Fanny and Nick is what forms the core of the show. She's amazing and plays the classic ugly duck to swan scenario beautifully. She's one of the greatest performers of her generation and you can't put that type of gift into words. She just has 'it' and I take my hat off to her.

Musical theatre has opened up a whole new career path for you. Was this ever part of the plan?

I've been really lucky. I only ever focus on one thing at a time so when I look at a project the main criteria for me is whether I feel passionate enough about it to put my blood, sweat and tears in for months at a time. I see myself as a professional storyteller who uses different mediums like music and theatre to create an impact that hopefully touches people's hearts. I've been so blessed to get to work with so many heroes such as Sir Tim Rice, Sir Trevor Nunn and Steve Lillywhite - some of the greatest minds in entertainment.

In between all of these projects you also returned to reality TV with “Popstar To Opera Star” and this time won. Versatility seems key to you're longevity.

People say it's hard to move between different industries and genres but I just don't see the walls. When the opportunity to train with Rolando Villazon, one of the greatest living tenors, came up I immediately said 'where do I sign?' You couldn't put a price on that kind of tuition and experience.

The public have always seemed to get behind you in all of the things you've done, haven't they?

I feel so grateful to everyone who has picked up the phone and given their support over the years. They've allowed me to keep coming back, to grow and to be of service to others and for that, I'll be forever in their debt. Getting to perform and connect with people is a gift. I bumped into a mother and daughter the other day and the mum knew me for “Gone With The Wind” while the daughter remembered me for “Colourblind” so it's interesting to discover that people see me in such different ways.

You were also one of the producers of the 2016 Daniel Radcliffe movie “Imperium”. Is the film world an area you want to work more in?

How does a boy from Scotland enjoy life in LA? Is it as mad as people assume?

I did all the big parties and wild nights out there early in my career and had great fun. If I got knocked down by a bus tomorrow at least I'd know I'd had some amazing experiences. LA is still seen as aspirational to so many. Fame, wealth, beauty and youth are the currencies on which everything seems to hinge but you soon realise that it's relationships, freedom and health that make you truly fullfilled. The one thing that drives every culture is relationships. I love getting back home to Scotland too and try to visit at least three times a year.

So if you could go back and chat to the Darius of 2001, what advice would you give him?

That's a tough one. I've learned so much along the way but I would probably say 'You've already been taught everything you need to know.' The answers are already within us and our parents reflect what we know but we don't want to listen to them because we're youthful, naive and arrogant and don't understand where the boundaries are. I wouldn't change a thing though...

I can look back at it and laugh. It was wonderful naivety on my part not imagining that one moment in time could create such a reaction from so many people. Reality TV was just starting out when it happened and now it's been seen by millions. Some people have bad hair days in a photograph and I had a bad song day that happened to be shown on national TV but I look back and think 'it's all good'.

Well you've got to be able to laugh at yourself haven't you? If you can't, you need to improve the relationship you have with yourself!

“Funny Girl” is at Manchester Palace Theatre until 19 Aug