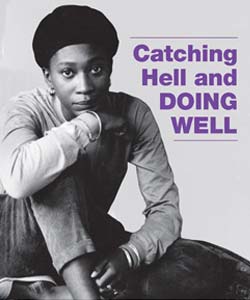 Some Saturdays you may catch up on the cleaning or some you may go for a day out, last Saturday, I was lucky enough to attend the book launch of “Catching Hell and Doing Well” by Diana Watt and Adele D Jones.

The book tells the story of the Abasindi Cooperative which was formed in Moss Side in the late 1970s and was a force to be reckoned with during the 1980s and 90s. What made this book launch so special was the huge number of women who had formed the Abasindi Collective in attendance. I knew it wasn’t going to be a run of the mill launch when I was greeted by funk music and a carnival atmosphere of dancing and laughing.

Everyone then crammed into a lecture theatre in Manchester Metropolitan University to spend three hours recalling memories and celebrating a moment in time when incredibly strong women stood up to be counted. It is always a privilege to be in the company of inspiring people but to be faced with a whole room of them was pretty breath-taking.

I spoke to author, Adele D Jones to ask why the time was right to write this book, “Why now?” she asked “Why not? We lost women too early to cancer and were looking through old photos and realised no-one is documenting this. So Diane and I decided to become our own historians”.

The group started with nothing, refusing any state funding to retain that all important autonomy. It was a very different Manchester to the one we now live in where women’s rights were low on the agenda and black women’s rights were even lower. But the motto of Abasindi was “Don’t agonise, organise” and a quiet army marched upon Manchester recognising that changing many small parts makes a significant whole.

The depth of Abasindi’s interests was quite staggering including an internationally renowned drumming and dancing troupe who performed all over the world, the most poignant being in Ghana where they stayed in a castle used for slave trading. This clearly had a profound effect on the women who soon became involved in deportation protests back in the UK as well as providing a Saturday school for local children and supporting black students at universities. As time wore on, a new group of people came of age, the Abasindi children, many of whom were in attendance on Saturday. It was clearly a special experience for the children to grow up in, as one summed up perfectly, “we can achieve anything from the seeds our parents did plant”.

In the modern world, we are more likely to Like a picture of a cute cat on Facebook than stand up for what we believe in and we can take a lot of lessons from these women who contributed to a huge social change within our city.

“Catching Hell, Doing Well” can be purchased from the attached link. http://ioepress.co.uk/

By Chris Park for Canal-St Online