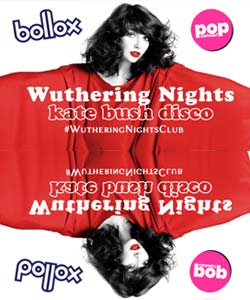 The Dawning of a New Bush

Friday 13th April, 1979. A young, innocent, teenage boy (me!) travels to the big city  (Edinburgh) for his first pop concert. Accompanied by three pals and a rabbit gonk (that someone stopped me from throwing towards the stage incase I took someone’s eye out), I saw the Queen of my musical world Kate Bush live on stage. Only 20 years old, she sang, danced, spun and acted her way through ‘The Tour Of Life’, a theatrical rock extravaganza unlike anything seen before.

Memories of that stunning show have forever remained. In the years since, friends, family, waistline and daydreams have come and gone but my love for that woman’s work has never wavered. Neither did my utter conviction that she would never tour again.

Then, two years ago, she came back! The prospect of ‘Before The Dawn‘ genuinely thrilled me, though 35 years is a long time to wait for a second date. Kate’s never followed the norm though and we love her all the more for it.

The internet melted the moment tickets went on sale. 22 shows sold out in 7 minutes, but someone was smiling down on me and I managed to get a couple of tickets and come September, a fellow Bush-a-holic chum and I ecstatically strolled into London’s Eventim Apollo.

The sense of anticipation from the audience was immeasurable – you could actually feel it. Any moment now, Kate would be there again right infront of me. The intervening years would melt away and I'd become a teenager again.

The deafening reception was joyful as she merrily led her band of minstrels onto the stage conga style, looking genuinely moved and amazed by the euphoric welcome.

We were treated to hits we never thought we’d hear live. ‘Hounds of Love’, ‘Running Up That Hill’, ‘King Of The Mountain'...THAT voice had become richer and deeper over the years yet was as powerful and tuneful as ever. She’d still got it!

She could have stood there and burped the national anthem and we’d have been delighted but this is Kate Bush and you knew something dramatic was imminent.

A cannon of gold tissue was fired into the audience and via film, swift scenery, plus entrances & exits from above and below the stage, we were treated to the whole of ‘The Ninth Wave‘ suite from side two of ‘Hounds Of Love‘. The story of a woman lost at sea began with a film of Kate floating in the water singing her drowning heart out. Brilliant, beautiful and bonkers!

After purchasing a T-shirt at the interval (which I still haven’t worn for fear of getting Pot Noodle on it), Act Two featured ‘A Sky Of Honey‘ from ‘Ariel' taking us through a summer's dawn ’til dusk.

Painters painted, wood models danced, feathers flew and even trees appeared from the sky. The songs were perfectly recreated musically and visually and at the end, Kate turned into a bird and flew!

After all the effects and drama, Kate returned to the prop ridden stage, sat at the piano and simply sang ‘Among Angels‘, a personal favourite that got me through my first Christmas Day alone in the city. Hearing her perform it live meant a lot.

A crowd bursting ‘Cloudbusting‘ encore brought the evening to a close and she was gone again.

All her albums returned to the chart and her 5 star triumph made every front page.

Today a triple CD of the show is released and tonight Bollox celebrate with a Kate Bush disco. Aatma/Pop Curious present 'Wuthering Nights' where you can bop to 'Babooshka' and shimmy to 'The Sensual World'.

As for future live shows, if the time span between gigs repeats itself, I’ll be 87 when Kate next performs. Mind you, she’ll be 91…