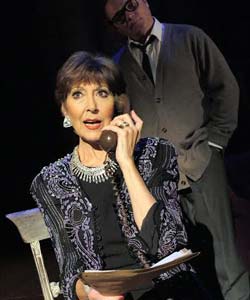 Our Drew Tosh caught up with 'The Unsinkable Anita Harris'

• She had a massive pop hit in the swinging sixties thanks to Dusty Springfield
• She appeared in two “Carry On” movies
• She worked with showbiz legends such as Eric & Ernie and Tommy Cooper in the golden TV age of the 1970's
• She had her own kids telly show (“Anita In Jumbleland”)
• She was even a figure skater!

If all of this doesn't elevate Anita Harris to gay icon status, I don't know what does...

She's also an accomplished actress as audiences are about to discover at Manchester Opera House when she appears in “Rehearsal For Murder” a classic 'whodunnit' featuring a cast of familiar TV favourites from shows such as “Eastenders”, “London's Burning”, “Peak Practice” and “Footballers Wives.”

As a showbiz veteran for over 50 years, Anita shows no sign of stopping. But just how does she remember being part of such a classic time in British entertainment?

'It was such a wonderful innovative era to have been part of. To be growing up in the business at an incredibly British time when the UK came through so strongly, especially with music and comedy, was just lovely.

Comedy is more strident now whereas in those days there was either a sort of innocence about it or it was 'naughty but nice' like the 'Carry Ons' were. I was so lucky to be on stage with the likes of Tommy Cooper and Harry Secombe at the London Palladium and on TV with Morecambe & Wise. I learned so much from them about things like timing, particularly when to keep quiet, and I'm very grateful to every one of them. All of those magic memories are embedded in my person and everytime I go onstage they're all there sitting on my shoulder.'

The entertainment world seems to be more competitive than ever these days, not least due to unskilled reality 'celebrities' polluting the airwaves. I wondered if Anita had any advice for young, talented people trying to make their way into the business?

'If you're young and going for auditions make sure you're well prepared and you've studied the brief! You also have to truly want to be in a business that can be so glorious at times but also so demanding. If you only half want it you won't really survive. It can be a wonderful world but you also have to be able to take disappointment on the chin.

The trouble with TV is it eats people up and spits them out so quickly. We had the chance to make mistakes when I started - even Eric & Ernie toured every theatre around learning their trade so when the big opportunities came they were ready.

Basically, if you feel you want it go for it, give it everything you've got because it's out there but there are so many other aspects of the profession that you can explore like set design, hair and costume. It's not just about performing and these other areas are just as important and great skills to have if you just want to be part of the business.'

As a recording artist, Anita found herself right in the middle of the flower power charts of 1967 with romantic ballad “Just Loving You”. It peaked at number 6 and spent over 30 weeks on the top 40 becoming one of the biggest hits of the year. People refer to the likes of The Kinks, The Who and The Stones when referencing that era of music but in reality, the best selling act of the year was Englebert Humperdink. Romantic, easy listening was massive and there was a lot of cross pollination in music. Jimi Hendrix even appeared on the Lulu show! Anita is still surprised today to have made an impact on the 60's scene.

'I recently found a list from the NME of the top twenty from 1967 and the fact I happen to be in there was a big surprise. I was very aware that I had found a space in a strange place but the music business embraced every style back then and there was less snobbery. There were a host of chart acts who came from the entertainment world as well as direct from the pop world. I recently appeared at the Looe Festival and I followed a  rock band! I thought 'where do I fit in with this?' but the audience were just so welcoming and they like a varied style of music so it was lovely. I have such fantastic memories from before but it's just as wonderful to still be performing and enjoying the people I'm working with now.

The big hit was all thanks to Dusty Springfield and I thank her everytime I sing it. I was on “Top Of The Pops” doing the Burt Bacharach number “Trains & Boats & Planes” and Dusty was also on that week with “You Don't Have To Say You Love Me”. She was watching my rehearsal and came across and said 'You have to meet my brother Tom because I think he's got the perfect song for you'. The song was “Just Loving You' and it was one of the most generous things a fellow artist could do. She could have so easily sung it herself and done it beautifully but she gave it to me so, thanks again Dusty.'

Female artists dominate the music industry now but in the 60s and 70s, very few managed to sustain a career as Anita recalls.

'There were about 5 of us back then! It was a very male dominated world. No one knew the meaning of the word 'emancipation' back then! It was a more innocent time and there was a feeling that if you were a girl you were always one step behind the boys. Now women are forging ahead in every walk of life, breaking through in industry and of course in politics with our second female Prime Minister. The circle of life comes round eventually!'

Anita is currently touring the UK in “Rehearsal For Murder”. Written by the team responsible for “Murder She Wrote” and “Columbo” this 'whodunnit?' is keeping audiences guessing right to the end.

'It's a play within a play and the story tells what happened on the show's opening night. I play the producer and part of the fun has been the audience reaction. It's been great hearing them whispering to each other who they think did it. It's a wonderful company to be part of and we're all on there together having a great time. Matching each other's speed and tempo is like playing a great game of tennis. It gives you a great buzz.'

Anita remains as busy as ever, working on a range of different projects for the next stage of her career.

'I'm going my one nighters in concert where I sing some special songs and recall anecdotes from my career then it's straight into panto with “Cinderella” in Torquay. My husband is a very creative man so we're also working on a Victorian detective series called “The Casebooks of Verity Lake”, we just need Steven Spielberg to take an interest now!

As well as all this we're also halfway through writing my autobiography and desperately trying to finish it. There are a lot of people in it that I want the reader to remember as well as stories of all the ups and downs of my life in the business.'

With such a long and varied career, that's going to be quite a read!