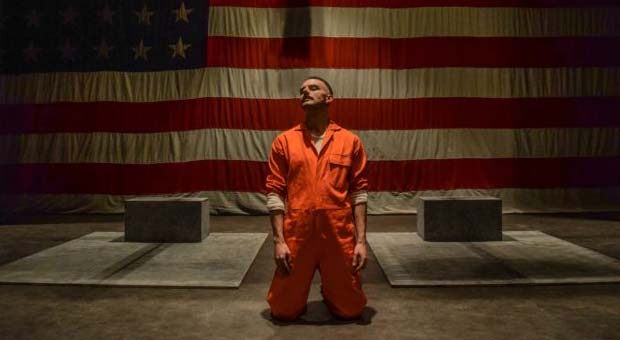 Jesus Hopped The A Train by Stephen Adly Guirgis

Jesus Hopped The A Train by Stephen Adly Guirgis has an intriguing premise, as it questions our notions of sympathy and empathy by contrasting the lives of two men in a high security prison. Angel Cruz is standing trial for shooting a reverend in the backside, and the reverend dies later. Lucius Jenkins is trying to avoid the death penalty, having killed eight people.

This play has a great reputation, having been performed in New York, London at the Donmar and it returns to the capital next year at the Young Vic. This is the first production in the North, and it is worth catching. The two central performances anchor this piece, and both actors are compelling, particularly in act two. Danny Soloman’s Angel Cruz is a complex and interesting young man, he keeps stating that he did not intend to kill his victim and separates himself from other murderers, as they may have enjoyed and planned to kill many people.

Faz Singhateh presents Lucius as intelligent, articulate, persuasive, but ultimately living in a very different world to everyone else. He speaks of the sheer wonder of killing, almost the same as someone who is binge watching a Netflix series.

Alice Byrony Frankham plays he lawyer tasked with defending Angel, and she is torn between the job she has begun the endure and doing right by her client. This is a really convincing turn, and her scenes with Angel are akin to watching a boxing match, as they spar verbally.

Louis Price’s set design is very effective, as it represents the cages and means the two protagonists have a divide between each other, albeit invisible.

Jake Murray’s production takes time to build, but once you begin to take in the tone of Adly Guirgis’ writing, you start to become immersed. The performances are assured and you really do believe that you are in a high security prison in New York, 18 years ago.

This is one of the best studio pieces that I have seen at HOME, as it is unique, has cracking dialogue and performances that stay with you, as well as a premise which makes you question your own values.

Jesus Hopped The A Train is at HOME until 19 May. Tix here.