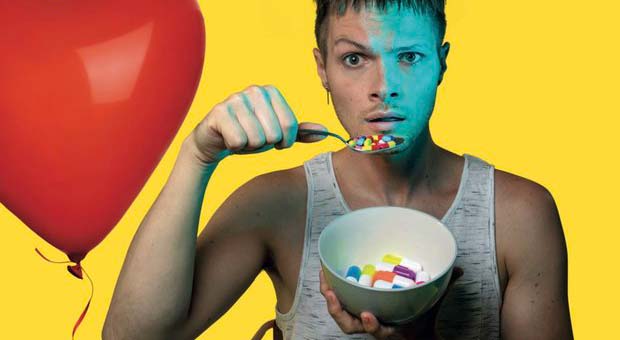 This piece and its content is subject to the writer’s opinion.

This weekend, I went to review “First Time” - a queer play by Nathanial Hall and I can say with greatcertainty that it is a must-see for all queer people, young and old. If you’re looking for a serious and respectful investigation into the stigma around HIV, or just to sit in your seat and laugh until your sides burst, then this is the show for you!

Immediately we are treated to a look into a typical morning for Nathaniel – sipping the remnants of a bottle of gin and wiping what appears to be the remains of a “baggie” from his nose. One immediately sees the similarities between this and the infamous classic “Ab-Fab”, something that had me laughing in an instant. Nathaniel should be credited for his practical approach to talking about recreational drugs use, boasting a refreshing take on what is usually dreary, insensitive and cheap.

I particularly enjoyed his interaction with the audience – something that I usually dread, because, it is almost always awkward and embarrassing. Not this time. One felt at ease as you were called up on stage to partake in his imaginary wedding to a woman, or even as you were being sprayed with silly string diarrhoea. It was comfortable, easy and downright entertaining!

What is most commendable is the frank and incredibly honest conversation he has about his HIV diagnosis and coming to terms with it. The account was brave and heartfelt. He talks about “Sue” the nurse who gave him his diagnosis, giving a hilarious impression of the lube-wielding nurse complete with a wig and gloved fingers. He also gives a detailed recollection of the issues which followed his diagnosis, ranging from self-loathing to alcohol abuse.

His social commentary on the treatment of people with HIV was thought-provoking, giving an account of how he was at the mercy of a panel of NHS workers who decided if he was worthy of being prescribed with a life-saving drug. However, something that brought it home was the mini memorial that was had in the theatre for all those who had fallen to HIV.

There were candles lit, wrapped in red ribbons and images of people with HIV nursed played in a movie that was both touching and heart wrenching. It was that moment that stole some tears from me. There was something both desperately tragic and dignified about it and I found it difficult to extinguish the flame which represented so much afterwards.

Go see this show immediately. It is sweet, tragic, heart-wrenching and above all, hilarious. No matter what age you are or where you come from, there is something for everyone to take away from this incredible show.

See what else is happening at New Adelphi Theatre