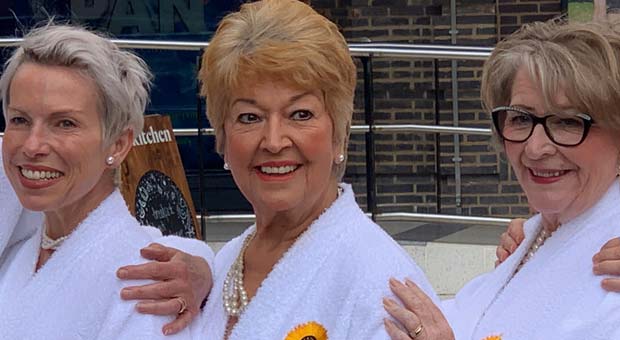 What a treat it was to represent Canal Street to see Gary Barlow and Tim Firth’s musical adaptation of Calendar Girls at Chester’s Storyhouse.

Having a chance to meet the cast earlier in the day was just fabulous and a little one to one time with the lovely Ruth Madoc and Sue Devaney was the icing on the bun! (pun absolutely intended!)

Gary and Tim have been lifelong friends having grown up in Frodsham, just outside Chester, so it was fantastic that they were able to stage the show at Chester’s fantastic Storyhouse theatre.

The theatre itself is a treat - gender neutral loos, amazing accessibility, a great bar and restaurant (the Rioja is a must if you’re not driving and fab coffee if you are) and friendly staff throughout.

So Ruth, from Maplins to Little Britain to Benidorm and here you are in Chester! Have you been here before? No, this was Ruth’s first visit and she’s hoping to get an hour or two free to see some of the city’s “Roman stuff”! Ruth is no stranger to Canal Street having enjoyed many a night out with the boys (dance cast) on her regular theatre appearances in the 90’s. She’s thrilled we are here to support the show but want’s to know where her invitation to take part in the Pride parade is? Hopefully she can join us next summer.

Spending some time with Manchester’s Sue Devaney was a dream come true. Very down to earth and lovely to hear some private stories from her time on Dinner Ladies with the late Victoria Wood. She took the part in this show for more personal reasons, having lost both her parents to cancer - the charity Bloodwise continues to benefit from every performance, raising millions since the original film stole our hearts back in 2002.

Sue will be back in Greater Manchester performing songs from the hit musicals in the new year in Rochdale and hopes we can all make it to see her. Sue cares passionately for the homeless and you can follow her on Instagram to see what she’s doing to help, not just in Manchester but everywhere she visits ( @suedevaney13 ).

So curtain up, and together with some fantastic music from the orchestra, the show opens with “Yorkshire” and we get to see the star studded cast on stage for the first time - joining Sue and Ruth are Sarah Jane Buckley (Hollyoaks), Julia Hills (Rona in 2point4 Children), Judy Holt (Coronation Street and Scott & Bailey), Lisa Maxwell (Loose Women & Eastenders), Sebastian Abineri (Eastenders & The Bill) and the very lovely Rebecca Storm (Evita, Les Mis, the list goes on - what a voice!)

A roller coaster of emotions, many laughs and a good few tears, and the story we know so well unfolds, with the first half showing John’s battle with cancer and getting to know the characters, including Celia’s M&S victorious Victoria sponge.

The photo shoots for the calendar in Act 2 were comedy gold - perfectly placed buns and fantastic acting and a standing ovation to finish.

The current tour of Calendar Girls The Musical is drawing to a close but we hope to see it back on stage again soon. Storyhouse has an array of fantastic productions lined up well into 2020 and makes for a fantastic excuse to stay over in Chester and enjoy the rest of the city too.

Check out what is on at the Storyhouse.