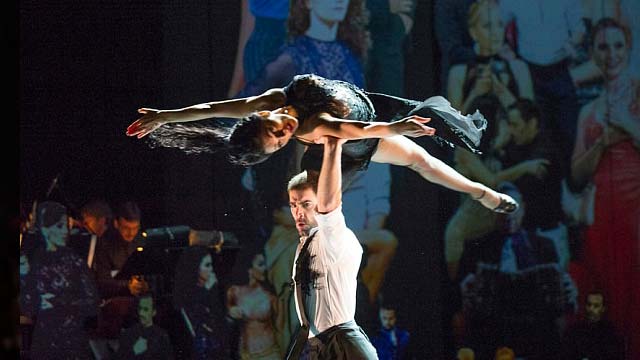 Milonga tangos into The Lowry

Deeply rooted in Argentinean culture, tango has fascinated and captivated the world with its sexuality, power and beauty. For Milonga, internationally celebrated choreographer Sidi Larbi Cherkaoui collaborates with an incredibly talented cast of 17 performers.

We were there and here is our review..

M¡longa, is a heady, at times intoxicating, performance, skillfully executed by talented dancers and their accompanists. The troupe comprises 10 tango dancers, 4 contemporary dancers and a band of 5 musicians.

Tango is an expressive dance, and tonight’s pieces pulled no punches in giving us sensuality, affection, comedy, virility, despair, loneliness, acrobatics, and balletic athleticism. Some dances were close embrace, others open, and we also a had nods to tango’s origins in a couple of male trio and duo performances. As always in tango, it’s the legs and footwork that matter, and here both were dizzying. In addition, several of the pieces involved extended lifts and throws. At times the female dancers were literally tossed in the air, and the pieces that ended the first and second halves were breathtaking.

If I had a complaint it would be that some of the kaleidoscopic projects were distracting, but overall it was a fantastic evening.

The standing ovation they received was completely deserved.