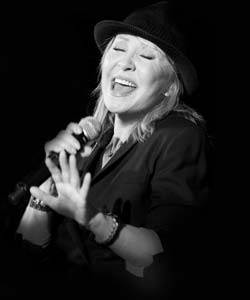 On the cab ride to the gig at The Academy, the driver asked who was on. When I said it was Lulu he replied 'THE Lulu? Why's she playing there?' After seeing the show, the answer was obvious... because she can!

Proving that it aint over 'til it's over, 2015 saw Lulu return to her musical roots - the source of how it all began as a 15 year old in 1964. She released her first self penned album to glowing reviews and embarked on a solo tour included a debut set at Glastonbury, not in the novelty Sunday afternoon slot but as a reborn singer/songwriter on the Avalon stage.

Backed by a solid 5 piece band who also provided spot on vocal harmonies, Lulu practically pounced onto the stage, roaring into life and announcing that she was happy to be here. This was no showbiz cliché however as she backed it up with 'I'm happy to STILL be here.'

She made it clear that this is indeed what she lives for and her love of music is evident from the first note. THAT voice is still as amazingly powerful as it's ever been and on the odd occasion you remember that this is a 67 year old grandmother jumping around the stage with her young band, it beggars belief. Suddenly I'm transported back to being a kid, sitting with my Granny watching this Scottish lassie singing and dancing on her own Saturday night TV series. Now, decades later, she's still going strong. Whatever she's on, I want some!

One minute she's the disco diva on 'Relight My Fire', then she's glamming it up on 'Man Who Sold The World' before taking everyone back to the swinging sixties with a  stripped down 'To Sir With Love' telling stories of Bowie, the Bee Gees and Sidney Poitier along the way. Always quick to mention how lucky she's been to work with the greats, never once thinking that they might have been lucky too.

The above mentioned numbers were among only a handful of hits to feature in the show, along with perhaps her best song as a writer 'Where The Poor Boys Dance' a poignant musical memory of life before fame. Despite the reflective nature of some of the set, this was very much about the newer material with 'Faith In You', 'Poison Kiss' and 'Every Single Day' rocking across the appreciative crowd and sounding totally current in a music business obsessed with youth.

Speaking of which, if the students queuing up two doors down for the Student Union had taken a detour they would have enjoyed a musical masterclass from a woman who is simply unsinkable.

As the cab driver remarked on the way back, 'fashion fades, class lasts.'