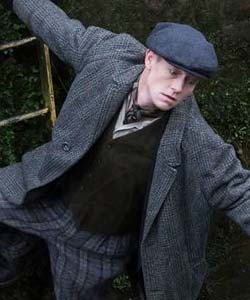 Harry Stokes - The Man-Woman of Manchester

Harry Stokes: The Man-Woman of Manchester

After the success of last year’s A Very Victorian Scandal, Pagelight Productions brought festival theatre back to Manchester’s LGBT History Festival. This year, the remarkable true tale of Harry Stokes is brought to life after remaining hidden amongst the press archives of Manchester Central Library for more than a century.

Harry Stokes was a Victorian brickie and later Special Constable who married twice. When his drowned body washed up in the River Irwell in 1859, he was discovered to be biological female. It is a truly fascinating story of a trans pioneer which quite rightly is finally being told.

Written by Abi Hynes, this two-hander performance transported us into the world of Victorian Manchester. The seemingly lifeless body of drowned Harry lies upon an examination table. Fully clothed in his Victorian attire, a nervous Ada prepares to complete the task thrust upon her of determining Harry’s biological gender. But the disturbed spirit of Harry jolts to life and we join Ada in a journey to discover the human behind the salacious headlines of the man dubbed ‘The Man-Woman of Manchester’.

There was so much depth and thought provoking stuff in this performance, despite a short running time. The strength of writing managed the difficult feat of synchronising historical truth with a poignant and human story but with a delicate sprinkle of occasional lightness. Joey Hateley's performance as Harry Stokes in particular, captured the inner turmoil of a man who was defied by his biology in a time when the term transgender did not exist.

Props to both performers as Hateley was joined by Jo Dakin who smoothly transformed back and forth from Ada to Harry’s two wives through a series of flashbacks to key moments from Harry’s two marriages. The first of which began to crumble on it’s wedding night as he is forced to explain that he’s man but that his ‘bits’ just don’t match. Not only is he rejected by his wife but we discover she went on to ignite the rumours and tittle-tattle that would blight Harry’s life. It would be easy to wonder how Harry thought he would navigate a marriage without his biological gender coming to light. However, it’s a testament to the writing and the performances that we understood Harry’s misguided motives; he was a man and Harry’s struggle was palpable.

There was something bittersweet about Harry’s second marriage. It was successful and long-lasting to a woman who it seems was one of the only people who accepted Harry for who he was. We were rooting for Harry to have found some sort of happiness in this acceptance and yet his turmoil prevailed. It was sad to watch Harry wrestle with himself and his body during a time in history where there seemed to be no explanation. It might be rooted in the past, yet it’s easy to see how this would resonate with a modern audience. It certainly left me wondering how Harry Stokes, as an unwitting pioneer of his time, would fare in a more progressed society.

The thought of the struggles faced by our LGBT ancestors is affecting stuff. But instead of throwing shade at history for it’s ignorance of gender identity, this performance dealt with the past with a sense of understanding. The character of Ada humanised the lack of awareness at the time; Ada represented a time when many people simply couldn’t comprehend the complexities of gender and sexuality. As Ada and Harry’s journey evolves Ada becomes sympathetic to Harry’s plight to die as a man. As a result, she’s left in turmoil as Harry pleads with her not to reveal the truth to those outside. But ultimately, Ada murmurs that going against the grain isn’t easy. A quiet line which says so much.

Engaging and informative, Harry Stokes: The Man-Woman of Manchester, was rightfully thought provoking stuff. The work of the LGBT History Festival is such an important part of our community and I hope this play continues it’s life beyond the festival. I’m already looking forward to see what hidden tales from the past are brought to life for LGBT History Month next year.